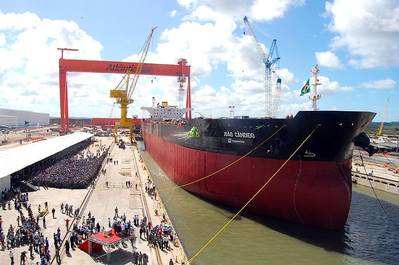 “We are proud to participate in this new chapter of Brazilian shipbuilding history”, said Lincoln de Sousa, Diesel Division director of MAN Diesel & Turbo in Brazil who also attended the ceremony. He continued: “We want to congratulate Transpetro on the successful launch and are confident that our engine will contribute to a successful working life for the new tanker. To this end, we have already trained some of the Zumbi dos Palmares crew on various aspects of the engine’s operation at our MAN Primeserv Academy in Rio de Janeiro.”

At the ceremony, Transpetro also announced the reactivation of contracts for 12 ships to be constructed by EAS. The latest newbuilding is one of 10 Suezmax vessels EAS is contracted to produce.  Transpetro is Brazil’s largest hydrocarbon transportation company and a fully owned subsidiary of Petrobras, the local energy multinational. Under PROMEF (Program for Modernization and Expansion of the Fleet), Transpetro has ordered a total of 28 ships, all to be equipped with MAN B&W two-stroke prime movers. Each engine has an output of circa 22,000 hp.

The Zumbi dos Palmares has a payload of one million barrels of crude oil, equivalent to half of Brazil’s daily production, and will primarily sail long, international routes. Immediately after the ceremony, the tanker started its maiden voyage, departing Atlântico Sul in Suape for the Campos Basin off Rio de Janeiro.