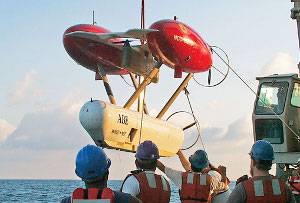 A deep-sea exploration robot — one of the first successful submersible vehicles that was both unmanned and untethered to surface ships — was lost at sea Friday, March 5, on a research expedition off the coast of Chile. The 15-year-old Autonomous Benthic Explorer, affectionately nicknamed ABE, was launched late on the night of Thursday, March 4, and had reached the seafloor to begin its 222nd research dive when, in the early hours of Friday morning, all contact with the surface vessel abruptly ceased. All efforts to reestablish contact failed.

The vehicle was designed, built and operated by scientists and engineers at the Woods Hole Oceanographic Institution (WHOI). Researchers on board the research vessel Melville believe the vehicle may have suffered a catastrophic implosion of one of the glass spheres used to keep ABE buoyant. An implosion, under pressure equivalent to more than two tons per square inch at depths of 3,000 meters (1.86 miles), would have caused all of ABE’s other spheres to implode, destroying on-board systems used to communicate with the surface ship and return ABE to the surface.

ABE was brought out of retirement to be used during the mission to explore the Chile Triple Junction, because its replacement vehicle, Sentry had already been committed to another research expedition. The expedition to the Chile Triple Junction, the only place on Earth where a mid-ocean ridge is being subducted (or pushed beneath) a continent (South America) in a deep ocean trench, began February 24 and is scheduled to run through March 17.

On ABE’s first dive on the research cruise, it had detected evidence of hydrothermal vents. At the time of its loss, ABE had just begun a second dive to home into a vent site and photograph it. ABE was launched from the Melville about midnight local time for its descent to the seafloor.

“After a smooth launch, the dive began normally,” scientists and engineers on the ABE team reported. “ABE actively homed to its assigned position, reached the seafloor, released its descent weights, then leveled off to check its ballast. After this point, we received no more acoustic returns from the vehicle on either of its two transponders”—undersea acoustic devices that transmit and receive sound signals between vehicle and ship. The loss had nothing to do with earthquake activity off Chile, the scientists said.

ABE was equipped with several independent systems to bring it back to the surface at the end of a dive or should a fault occur. The Melville remained in the vicinity to see if ABE had resurfaced, at first searching for ABE’s strobe lights in the darkness. Researchers tried to establish radio contact with ABE in the event it had surfaced, but attempts turned up nothing.

Constructed using funding from the National Science Foundation, ABE was designed and built in the mid-1990s at WHOI by Al Bradley, Dana Yoerger, and Barrie Walden. First launched in 1995, ABE was part of a new kind of deep-submergence vehicle – the AUV. Chris German, National Deep-Submergence Facility chief scientist and a co-chief scientist for the Chile Triple Junction expedition, said ABE “revolutionized deep-sea exploration by expanding scientists’ abilities to reach into the deep.”

Unlike human-occupied submersibles or vehicles connected by cables to surface ships, ABE could survey wide swaths of undersea territory on dives lasting up to a day. Enhanced over the years with multibeam sonar, Doppler navigation, and an anchoring system, which were funded by NOAA, ABE was pre-programmed to maintain a designated course but had enough decision-making capacity to avoid collisions with seafloor terrain.  ABE made detailed, high resolution maps, “sniffed out” unusual chemicals emerging from the seafloor, and photographed biological communities and complex geological features. It often operated from ships in remote areas with no other systems available for rescue should it become trapped or disabled. While risky, this strategy paid off, enabling multi-disciplinary research in previously unexplored regions, such as the South Atlantic and the Indian Ocean.

Built as a prototype, ABE quickly became a workhorse. It was the first autonomous robot to make detailed maps of mid-ocean ridges, the 40,000-mile undersea volcanic mountain chain at the boundaries of Earth’s tectonic plates where new seafloor crust is created. It was also the first AUV to locate hydrothermal vents, where hot chemical-rich fluids spew from the seafloor and sustain lush communities of deep-sea life.  ABE explored seamounts, undersea volcanoes, and other areas with harsh, rugged terrain. In addition to researchers and students from the United States, ABE advanced research for scientists and engineers from Canada, the United Kingdom, Germany, Australia, New Zealand, Japan, China, Italy, Ecuador, and most recently Chile.

“ABE was a vehicle that we’ll always have fond memories of— it was a world-beater in its day,” German said. “In a way, it’s fitting that its demise comes on the job, and that it has gone to be recycled through the Chile subduction zone.”