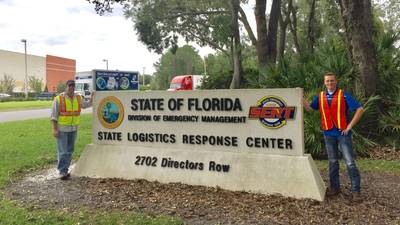 Supporting relief efforts for victims of Hurricane Matthew in Haiti, Florida and throughout the U.S. Southeast, Crowley Maritime Corporation’s logistics group is successfully delivering logistics services for the transportation of water, generators and food and other supplies in partnership with U.S. agencies and the State of Florida.

Under federal contract, Crowley has personnel on site in Port au Prince, Haiti, supporting the efforts of the U.S. Naval Supply Command to supply aid to the Haitian people. The current effort follows Crowley’s relief support following the 2010 Haiti earthquake, where the company assisted the U.S. Southern Command, U.S. Transportation Command, the U.S. Army’s Surface Deployment and Distribution Command, Defense Logistics Agency, and the USAID’s Office of Foreign Disaster Assistance with a myriad of logistics services to help reopen the port and reestablish the flow of cargo and relief supplies to those affected by the quake.

As was the case with the 2010 Haiti earthquake, Crowley’s distribution facility in Miami is being used in its standing role as a disaster response warehouse for U.S. Agency for International Development (USAID) for the Hurricane Matthew response. The warehouse keeps ready essential items, such as sanitary items, basic eating utensils and tarps that are needed by the general population when faced with a disaster.

“We are pleased and grateful to be able to help people recovering from Hurricane Matthew in Haiti and Florida, because we know how important it is to get relief supplies to those who need them as quickly, efficiently and safely as possible,” said Frank Larkin, Crowley’s senior vice president and general manager, logistics.

Despite being impacted itself by the hurricane, Crowley’s inland trucking team of dispatchers and carrier representatives temporarily relocated to offices in Cincinnati, Ohio, and Pennsauken, N.J., in advance of the storm to effectively manage the relief logistics operations.

As Hurricane Matthew churned through the Caribbean, the Federal Emergency Management Agency (FEMA) began ramping up, establishing an intermediate staging base at Fort Bragg, North Carolina, where cargo such as food, water, and generators could be gathered and consolidated for delivery later to impacted communities. Crowley moved nearly 40 loads from FEMA’s Atlanta and Fort Worth, Texas distribution centers to the staging base in Fort Bragg and to a second staging location at the Marine Corps Logistics Base in Albany, Ga.

Crowley’s logistics group was also mobilized to assist the State of Florida’s logistics operations, based in Orlando. Providing on-site support, Crowley established operations to coordinate delivery and management of more than 137 trucks and trailers. The combination of tractors, dry vans and refrigerated vans were ready when needed to shuttle relief supplies to affected areas around Florida and specifically to Duval, St. Johns and Flagler counties that were hit especially hard. Supplies included water, generators, cots and ready-to-eat meals.