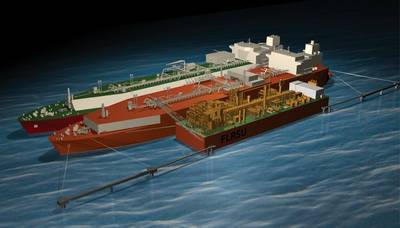 Shanghai-based Wison Offshore & Marine Ltd., a subsidiary of the Wison Group, announced today the successful award of a contract by the Exmar group for engineering, procurement, construction, installation and commissioning (EPCIC) of the world’s first Floating LNG Liquefaction, Regasification and Storage Unit (FLRSU). The facility will be used by Exmar under a Build, Own, and Operate contract with Pacific Rubiales Energy Corporation, and located on the Caribbean coast offshore Colombia. Commercial operations are planned to commence from the fourth quarter of 2014.

The FLRSU consists of a non-propelled barge equipped to convert 69.5 million scf/d of natural gas into LNG (+/- 500,000 tons of LNG per annum) that will be temporarily stored in on-board tanks with a total capacity of 14,000 m3 and subsequently offloaded either to a permanently-moored floating storage unit or shuttle tankers. The facility will be moored to a jetty and supplied with gas by pipeline from the onshore La Creciente field, located in the Lower Magdalena Valley Basin.

Wison Offshore & Marine will be responsible for the design and engineering of the unit from its Shanghai operational center with construction to be performed at Wison’s wholly-owned fabrication facility located in Nantong, China, and further support supplied from the company’s subsidiary in Houston, Texas, USA. Black & Veatch has been contracted to execute the engineering and procurement of the topside liquefaction equipment and packages using its patented PRICO® LNG technology, and providing on-site commissioning and startup services. The complete FLRSU, including process systems, will be designed and constructed in compliance with the relevant rules and regulations of an internationally recognized Classification Society.

Exmar CEO Nicolas Saverys commented: “Signing the EPCIC contract with Wison is an historic event not only for EXMAR and WISON, but also for the LNG industry, as the world’s first floating liquefaction unit moves from concept development into a firm turnkey contract. Exmar is very proud to join forces with Wison Offshore & Marine to deliver a successful product to our strategic partner, Pacific Rubiales Energy. The proven track record of Wison Offshore& Marine in delivering offshore structures in time and on budget was a key driver.”

“We are honored that Exmar, one of the world’s pioneering LNG players, chose Wison to provide the world’s first floating facility to produce LNG from an onshore field,” said Wison Offshore & Marine Executive Vice President L. Dwayne Breaux. “Wison has been actively looking for the chance to be involved in the burgeoning LNG market for some time, and to be able to provide a project of this significance cements our role as a premier EPCIC provider for that market and the offshore industry as a whole.”