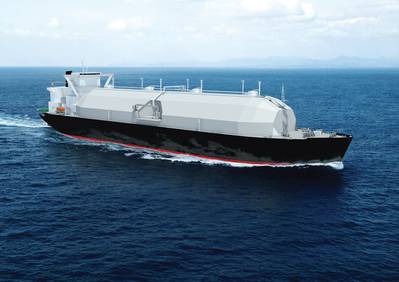 Mitsubishi Heavy Industries, Ltd. (MHI) recently commenced construction of the first ship in its “Sayaendo” Series, which it has developed as a new-generation liquefied natural gas (LNG) carrier, at the company’s Nagasaki Shipyard & Machinery Works. The LNG carrier is one of two ships ordered jointly by Osaka Gas Co., Ltd., and Mitsui O.S.K. Lines, Ltd. (MOL) in October 2011. The Sayaendo Series has a hull shape that evolved from LNG carriers with Moss-type* hemispherical tanks, and it is designed to offer improvements in fuel consumption and maintainability. The unit now being built is slated for delivery in the fiscal year 2014 (ending March 31, 2015).
At a ceremony held at the shipyard to mark the occasion (pictured right), a prayer was offered up for safety throughout the vessel’s construction. The ceremony was attended by representatives of the ship’s owners and from MHI.
The LNG carrier will measure 288 x 48.9 with a 11.55 m draft.

The 138,000 gt (75,000 dwt) ship is capable of carrying up to 153,000 cu. m. of LNG (cargo tank total volume: 155,000 cu. m.). It will be jointly owned by Osaka Gas International Transport Inc. (OGIT), a wholly owned subsidiary of Osaka Gas handling the operation of LNG carriers, and MOL, which will function as the ship management company.

To protect its four Moss spherical tanks, the Sayaendo features a peapod-shaped continuous cover integrated with the ship’s hull in lieu of a conventional hemispherical cover. This innovative configuration enables reductions in size and weight while maintaining the ship’s overall structural rigidity. The continuous cover over the tanks also improves aerodynamics by substantially reducing wind pressure, which serves as drag on ship propulsion. For its main power plant the Sayaendo adopts MHI’s “Ultra Steam Turbine Plant” (UST), a new turbine that provides higher thermal efficiency through effective use of thermal energy by reheating steam. Through downsizing, weight reduction and hull line improvement, the new ship achieves a substantial 25% reduction in fuel consumption per unit cargo compared to conventional ships.
With a conventional cover configuration, pipes, wires and catwalks atop the tanks are supported by complex structures. By covering the tanks with an integrated cover and making those supporting structures unnecessary, the new design also improves maintainability. In addition, CO2 emissions are reduced as a result of decreased fuel consumption, and response to environmental issues is further enhanced with installation of a ballast water treatment system, which addresses impact on the marine ecosystem.
To date MHI has received orders for five Sayaendo Series carriers in total, including another ship ordered by MOL in June.


(As published in the January 2013 edition of Maritime Reporter - www.marinelink.com)