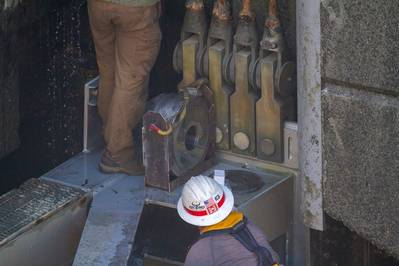 Commerce is now moving normally along the Columbia River and through John Day Lock after U.S. Army engineers completed repairs to damaged guide wheels by 12:30 p.m., August 5. Technicians originally discovered damage to a lower guide wheel on July 25, which initially closed the lock, and then slowed traffic at that point in the river.

The U.S. Army Corps of Engineers was able to re-open the lock to river traffic on July 26 by using a floating bulkhead. However, a tug had to move the bulkhead to operate the lock – doubling the normal 45-minute process it took river users to get through.

“Commercial river users need reliability and predictability, so our team worked very hard to get the lock fully functioning as soon as possible,” said Kym Anderson, operations division chief for Portland District. “We were also fortunate to find that most of the guide wheel components were reusable and that we only needed to replace the bushings. Since we saw similar wear and tear on the remaining three wheels, we repaired all wheels on the upstream gate to avoid failure of those wheels.”

Guide wheels are rollers attached to each side of the 215,000-pound vertical lift gates (north and south). These wheels are the interface between the gate, which is moving, and the concrete wall, which is not moving. They’re there to maintain the alignment of the gate as the gate moves up and down through its normal range of motion during lockages. There are two guide wheels on each side of the gate (four in total).