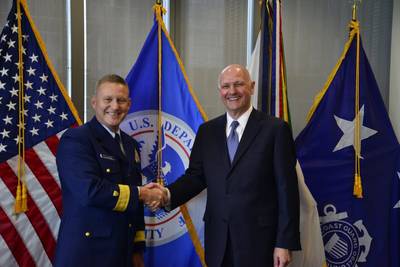 The U.S. Coast Guard and DNV GL have signed a memorandum of agreement (MOA) authorizing DNV GL to participate in the Alternate Compliance Program (ACP) and delegated certain survey and certification services for U.S. flagged vessels.

This delegation and MOA, signed by Rear Adm. Paul Thomas, assistant commandant for prevention policy, and Captain Blaine Collins, DNV GL vice president of group government and public affairs for the U.S., supersedes the agreements previously executed by DNV and the Coast Guard on August 4, 2006, and GL and the Coast Guard on September 7, 2011.
The ACP is an alternative to complying with vessel certification and inspection standards contained in Title 46, Code of Federal Regulations, and administered through inspections conducted by Coast Guard personnel. It provides an alternate process for an owner of a U.S. registered vessel to obtain a Coast Guard Certificate of Inspection by complying with the standards of an authorized classification society, International Conventions and a U.S. supplement.
“With the signing of this memorandum, DNV GL is undertaking a significant level of responsibility and work on behalf of the U.S. Coast Guard,” said Thomas. “We are confident in their abilities to support our efforts and look forward to having them on board.”
“We greatly value the ongoing relationship we have with the Coast Guard,” said Collins. “We appreciate their trust and confidence in DNV GL to provide statutory services on behalf of the U.S. Coast Guard.”
The classification society ACP authorization is intended to reduce the regulatory burden on the maritime industry while maintaining existing levels of safety and provide the maritime industry with flexibility in determining how to build and operate U.S. flagged vessels.
• Certificate • certification services • DNV GL