Chinese Imports of Tariffed Goods from US Drops -BIMCO 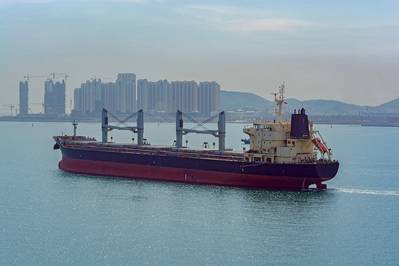 US seaborne exports to China of the goods which China has imposed tariffs on since the start of the trade war fell by 37.6% in the first 11 months of 2019 (11M 2019) compared to the same period of 2017, the last full year unaffected by the trade war. Despite the drop in exports to China, total US seaborne exports of the tariffed goods have risen in the same period, as exports to the rest of the world have compensated for the decrease to China. 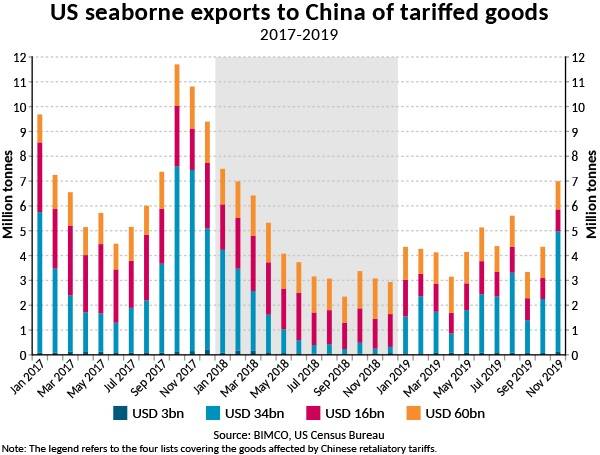 Overall seaborne volumes of the affected goods to China have fallen by 30 million tonnes in 11M 2019 compared to the 11M 2017. The fall in exports came in 2018, during which US exports of the tariffed goods to China fell by 41.8% (-37.3 million tonnes). A slight year-on-year rise in exports in the first 11M of 2019 (+1.6%) is far from being enough to offset the 2018 losses, with exports remaining at much lower volumes than they were before the trade war.

The trade war has been marked by repeated rounds of tariffs imposed by the US against China, prompting China to announce retaliatory tariffs on its imports from the US. These retaliatory tariffs came in four rounds with the rounds covering respectively USD 3 billion, USD 34 billion, USD 16 billion and $60 billion worth of Chinese imports from the US in 2017, cumulatively covering over 90% of total US exports to China in value terms.

“While much attention has been placed on the developments in US imports of tariffed goods due to the larger value and volume of these tariffs, the effects of the trade war have also been felt on US exports of goods now facing tariffs in China, where there has been no boost to shipping from frontloading of containerized goods, as was the case for tariffed US imports in late 2018,” says Peter Sand, BIMCO’s Chief Shipping Analyst.

US exports to China; so much more than just soya beans
Soya beans are the single largest commodity hit by the trade war in terms of volume terms, having faced tariffs since July 2018 as part of the $34 billion list. Because of the high volumes, developments in the soya bean trade have a significant influence on the developments in total exported volumes of the tariffed goods.

Removing soya beans from total volumes results in a larger percentage decline (-42.7%) in 11M 2019 compared to 11M 2017 in seaborne exports of the tariffed goods to China, with a fall of 22.3 million tonnes. The decline in 2018 is less marked, only down 24% (compared to 41.8% when including soya beans) but saw a further drop of 26.9% in 11M 2019 compared to the same period in 2018 (instead of 1.6% growth). This illustrates the fact that after a dramatic reduction in exports to China in the last four months of 2018, when the US exports the majority of its soya beans, the easing of tensions between the nations led to higher soya bean exports in 11M 2019. This single handily pulled total seaborne exports of the goods into positive territory in 11M 2019. 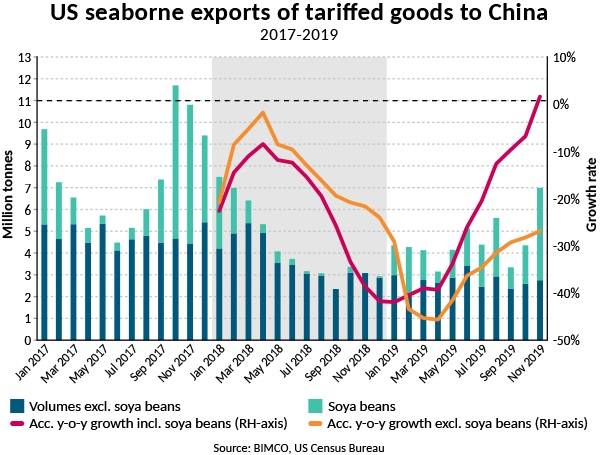 Soya beans were included in the second round of the Chinese retaliatory tariffs worth $34 billion, implemented in July 2018, and have proven to be an interesting commodity to watch. Chinese imports here have closely followed the relationship between the two nations over the course of the trade war, with exports increasing as tensions eased.

“BIMCO has closely followed the development in the soya bean trade between the US and China, and will continue to do so, as this is an important trade for the Panamax and Supramax sectors which rely on strong volumes here during the fourth quarter of the year,” Sand says.

“The recent signing of phase one of a US-China trade deal will bring US soya bean exports back into the spotlight, as this is one of the commodities included in the Chinese pledge to buy more goods from the US in order to reduce the US trade deficit,” he adds.

“However, with lower demand in China for soya beans as a result of the African Swine Flu and the massive culling of pigs that has taken place, even the trade deal cannot guarantee that volumes in this trade will return to pre trade war levels,” says Sand.

Phase one of a deal has been signed-. So what?
Now that details have finally been released about the long-discussed phase one deal, what it could mean for the shipping industry has become clearer. China has committed to purchasing $63.9 billion more manufactured, agriculture and energy goods this year than it did in 2017, and $98.2 billion more in 2021 than in 2017. The rest of the widely talked about $200 billion comes from services and will therefore have no impact on the shipping industry.

Should these volumes materialize, it would reverse much of the lost volumes between the US and China caused by the trade war. However, while volumes on this trade may increase, many of the extra volumes may come from trade diversion, rather than trade creation, with the US exporting more to China instead of other nations and China sourcing of its goods from the US in favor of other nations.

“Higher tonne mile demand may be the result of the US sending its exports to China instead of to closer destinations to fulfil some of the phase one deal pledges. This would be the case even if the extra volumes to China materialize as a result of lower exports to other countries, thanks to the long distance to China,” Sand says.

“For its part, China has in recent years focused on diversifying its sources of key imports to ensure that it is not reliant on only one trading partner. The degree to which they will be willing to increase the share of imports of the goods highlighted remains to be seen. So does their commitment to upholding the deal,” says Sand.

Read more about how US exports of the tariffed goods to the rest of the world have been affected, as well as how the different shipping segments have been affected by the Chinese retaliatory tariffs, when we publish part 2 of this article next week.