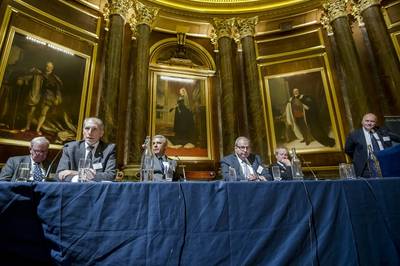 Bullying, micro-management of his activities and the threat of going to jail while doing his job, remain major pressures for the Masters of merchant ships - and the situation is getting worse.

‘Masters Under Attack – Authority and Responsibility in an Age of Instant Access’ was the topic discussed by an expert panel at the Cadwallader Debate, organized by the London Shipping Law Center (LSLC), at Drapers’ Hall, London.
The panel, chaired by Lord Clarke of Stone-cum-Ebony, consisted of Debate Moderator Captain Kuba Szymanski, Secretary General of InterManager; Michael Chalos, Partner at K&L Gates LLP (New York); Michael Kelleher, Director at West of England P&I Club; Jeff Lantz, Director of Commercial Regulations and Standards at the US Coast Guard; and Faz Peermohamed, Partner and Head of Global Shipping at Ince & Co.
Whenever there is an accident in the United States Masters face the possibility of going to jail just for doing their job, according to Mr Chalos addressing the packed hall of maritime professionals.
He said: “If you are the Captain and you have an accident and a spill, you are liable. It’s that simple. It’s very hard to defend such cases. Every Master who comes into the US faces the possibility of going to jail after an accident. The same thing is happening around the world.
“With high visibility, press and politicians get involved and Captains get charged and convicted. They are sometimes held for an inordinate amount of time, while the authorities investigate and pursue the matter.”
With the rise of modern technology onboard, Mr Chalos pointed out that “every crew member becomes an agent for the US Government,” given the considerable incentive offered to whistle blowers.
“They have these cell phones and modern technological equipment. If a Chief Engineer does something illegal, these guys record and film what’s going on.
They then turn the material over to the US authorities and get 50 per cent of any fine. We always thought the Master was safe from being prosecuted in these circumstances,” Mr Chalos said.
Mr Peermohamed referred to Masters as the “poor relations,” at the event held on on October 26th.
He asked: “Does the perception reflect quality? Is the Master truly under attack? Do the commercial pressures on the Master impinge more significantly than previously? Are the legal burdens on the Master more significant than before? Is there bullying? Is there interference by the authorities? Is criminalization on the rise?
“Sadly having been involved in many significant casualties, I have to tell you that the perception is indeed the reality in many parts of the world. Masters are often treated as poor relations. In my view, their treatment is different to that, which would be afforded to an airline pilot in similar circumstances.”
He asserted that Masters’ activities were sometimes being micro-managed, leading to a lack of trust.
Mr Lantz spoke about how Masters’ responsibilities had become more shared with others over the years.
He said: “The burden of the Master is higher than that of other ship entities in the management operation chain. However, there are now laws and regulations which spread that authority and responsibility.”
Mr Kelleher highlighted the role P&I Clubs play. He explained how clubs were wary of providing specific financial support for Masters in the early stages of a case as the authorities’ intentions and the culpability of parties involved were by no means clear. Clubs could protect Masters more by providing training for members to assist them in learning lessons from events – even near misses.
• airline • cell phones • England P&I Club