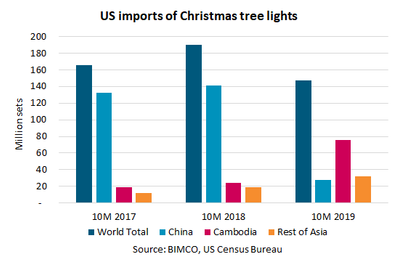 The US has seen a big drop in the import of Christmas tree lighting sets from China.

Christmas tree lights are one of the thousands of commodities which have been involved in the trade war. Imports from China of these lights have faced tariffs since September 2018. This has led to imports from China falling dramatically, from 140 million to just 27 million Christmas tree lighting sets in the first ten months of the year, with its share of total exports dropping from 80% in 2018 to just under 19%.

Although exports from other Asian countries, and in particular Cambodia, have risen, this has not been enough to fully compensate for the drop in exports by China.

Rising exports from Cambodia, as well as other neighboring countries, have however not been enough to fully compensate for the drop in exports from China. Total imports by the US have therefore fallen to 147 million sets in the first ten months of 2019, down from 189 million in the same period of 2018.

The US imported a total of 196 million Christmas tree lighting sets in 2018.

The changing patterns in US Christmas tree light imports are reflected in the big picture, with total US containerized imports from Asia managing to grow year-on-year despite a drop in imports from China, as manufacturing is re-shuffled in the region.

NOTE: For shipping, the trade war has meant that volumes between China and the US have fallen. However, the increasing exports from China’s neighbors have brought some good news to the shipping industry, as volumes from the region in general continue to show positive growth with the same long distances benefiting the industry.