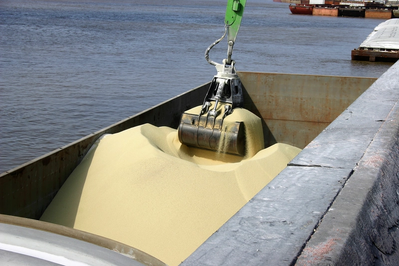 Record-breaking demands for coal and agriculture products propelled the Port of Indiana-Mount Vernon into historic territory with more barge shipments in the first six months of 2018 than any port in the history of Indiana's ports.

Approximately 4.7 million tons of cargo moved through the port in the first six months of 2018, an increase of 36 percent from the same time last year. Key drivers of the record shipments included maritime shipping increases in coal, grain, dried distillers grain, calcined coke, salt and soy products. This achievement follows the port's highest first quarter volume ever recorded at any of the state's three ports, a new all-time monthly tonnage record in May 2018 and a record-breaking shipping year in 2017.

The 2018 six-month volume would rank as the eighth highest annual total in the port's 42-year history even if shipments stopped June 30. The port also recorded its third-highest monthly total of the year in July at a robust 812,128 tons, putting the port on track for an unprecedented volume of shipping this calendar year.

"Our previous six-month record occurred in 2016 when port shipments registered 4 million tons," said Phil Wilzbacher, port director for the Port of Indiana-Mount Vernon. "As the sixth largest inland port district in the country, this port serves a significant region of the Midwest by providing multimodal infrastructure for industries requiring access to river, rail and roadway logistics. It is very encouraging to see substantial growth continue to build over the past three years as our southwestern Indiana port serves as a hub for global and domestic markets."

The Port of Indiana-Mount Vernon is also home to the largest maritime greenfield property available in the Midwest. The port owns a 544-acre site that offers connections to five Class I railroads as well as access to extensive port infrastructure including existing bulk and general cargo piers, the port's rail and road network and industrial utilities, all of which make it a top-tier location for companies in the market for a large multimodal site.

"We are determined to ensure our port companies have access to essential distribution channels through our logistics network," said Vanta Coda, CEO for the Ports of Indiana. "The Ports of Indiana has more than 70 companies shipping to or from all 50 states and 31 countries and our maritime activities generate $7.8 billion annually in economic activity. To support and cultivate growth and competitiveness for our companies and our state, we are continuing to invest in our infrastructure to make sure our multimodal connections will always meet the needs of our port companies."