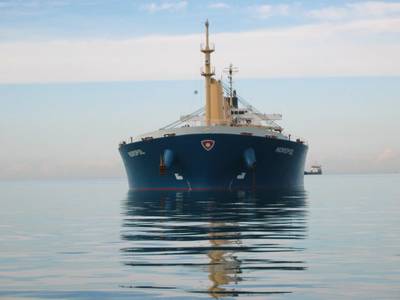 The Baltic Exchange's main sea freight index, tracking rates for ships carrying dry bulk commodities, notched its biggest one-day percentage gain in five months on Thursday, buoyed by soaring demand for larger vessels.
The index, which factors in rates for capesize, panamax, supramax and handysize shipping vessels, was up 42 points, or 4 percent, at 1,092 points – the highest since April 28.
"We are seeing a seasonal uptick ... This time of the year you basically see the rates improve," said Herman Hildan, analyst at Clarksons Platou Securities.
The capesize index gained 135 points, or 7.93 percent, to 1,837 points, the highest since April 20.
Average daily earnings for capesizes, which typically transport 150,000-tonne cargoes such as iron ore and coal, rose $1,280 to $14,818, a peak since April 19.
"The recent data on imports into China, which is a key driver, is also supportive of the dry bulk market," Hildan said.
While overall iron ore supply in China is high, particularly at its ports, traders said availability of high-grade raw material is limited. Steel producers are increasingly opting for higher grade iron ore to boost efficiency.
Iron ore shipments account for around a third of seaborne volumes on the larger capesizes.
"Capesize dry bulkers are gapping up yet again, boosted by strong levels of activity in the Atlantic region, particularly in the north Atlantic," Hildan wrote in a note co-authored with other Clarksons Platou analysts.
The panamax index was up 36 points, or 3.02 percent, at 1,228 points.
Average daily earnings for panamaxes, which usually carry coal or grain cargoes of about 60,000 to 70,000 tonnes, increased $284 to $9,832.
Among smaller vessels, the supramax index was flat at 756 points, while the handysize index fell one point to 466 points.