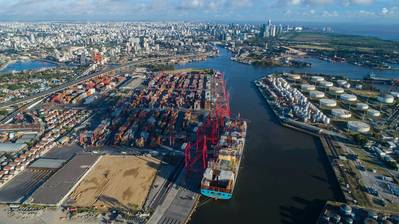 Argentine ship workers will stage a 24-hour strike on Thursday to protest what they call delays by the government in awarding tenders to the sector, although the action is not expected to affect activity at key grains ports in and around Rosario.

The Maritime, Port and Naval Industry Federation (Fempinra) announced the strike on Tuesday, less than a week after protests by grains truck drivers snarled up transportation of soy and corn right in the middle of the harvest season.

Worker protests have grown more common in the South American country, the world's top exporter of processed soy and no. 2 shipper of corn, amid rampant inflation running above 50% that hits workers' earnings and spending power.

"On Thursday (April) 21 we will stop activities for 24 hours in the metropolitan port terminals (of Buenos Aires city) and the river-maritime export corridor," Fempinra said in a statement.

The federation cited delays in a tender for the maintenance of the Parana River - along which 80% of the country's agricultural exports are transported from Rosario to the sea - and for the port of Buenos Aires.

However, the Chamber of Port and Maritime Activities (CAPyM) told Reuters that the strike should not affect the key Rosario area, since Fempinra does not have a major presence there.

"The area of Timbues, Puerto General San Martin, San Lorenzo and Rosario are not affected by this strike action," said Guillermo Wade, manager of the CAPyM.