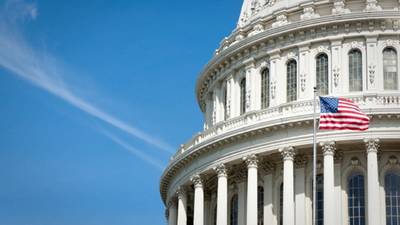 If enacted, the bill is expected to spur the construction of dozens of ships, supporting thousands of good-paying jobs in American shipyards, as well as the domestic vessel component manufacturing and maritime industries.

According to an estimate from the Shipbuilders Council of America, the bill would result in the construction of more than 40 ships: approximately 28 LNG carriers by 2041 and 12 oil tankers by 2033.

“Our bipartisan bill counters other export countries’ similar requirements, including the Russian-flagged vessel requirement for arctic oil and natural gas exports announced by the Kremlin in December 2018. American shipyards and mariners are ready for the job, and our bill ensures they are no longer expected to compete against heavily subsidized foreign shipyards in Korea, China, and elsewhere,” he added.

“Maintaining a strong domestic maritime industry is essential for our national defense,” said U.S. Senator Roger Wicker. “This legislation would strengthen our shipbuilding industry, support American maritime jobs, and ensure the United States has enough American-flagged, crewed, and built ships to transport its growing oil and natural gas exports in times of conflict. Our geopolitical rivals have invested heavily in their shipbuilding capacity, and the U.S. should keep pace.”

“With the Energizing American Shipbuilding Act, American energy will be transported on American-owned, American-crewed, and American-built ships and the shipbuilding industry will have increased investment in new, state-of-the-art LNG and crude carriers to rival that of China, Russia, India, and other nations that are focusing billions of dollars in shipbuilding capacity,” said Shipbuilders Council of America President Matthew Paxton.