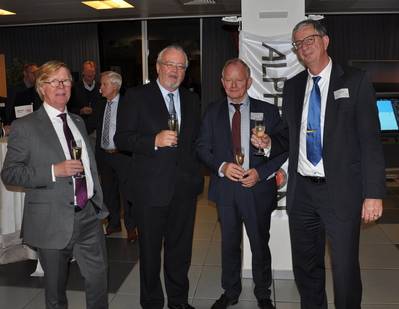 Alphatron Marine said it has acquired a new office and warehouse space in Zwijndrecht, Belgium to serve customers in Belgium and France. The new location – operational since September and officially opened on November 9, 2016 – replaces the company’s existing Meerdonk office.

Alphatron Marine Belgium is part of a group of companies governed by Alphatron Marine. Together, they act as importer, producer, developer and service provider of navigation, communication and automation systems. Besides this, the company provides specialized IT solutions.
The company’s new central location in Zwijndrecht is situated on Nieuwe Weg, a stone’s throw away from the port of Antwerp. The building is easily accessible from the port and the Deurganckdok, which is directly connected to the North Sea.
The new location in Zwijndrecht was officially opened on November 9, 2016, followed by speeches from Erik van Boom, Country Manager; Luuk Vroombout, CEO, Alphatron Marine; and Marc van Peel, port alderman and chairman of Antwerp Port Authority.
In order to operate fully as a system integrator, Alphatron Marine made a strategic partnership with JRC (Japan Radio Company). A ‘one-stop-shop’ concept was introduced, with complementary products. Where Belgium was first seen as a focal point, the branch has grown in recent years to a location that commercially contributes to the success of Alphatron Marine. Five service engineers support customers in the following markets: fishing, offshore, maritime, dredging and government.
Besides a private product line, the AlphaLine, the brand also represents, among others: Sailor-Cobham, Yokogawa, Skipper, McMurdo, Jotron, Intellian, Transas, Saab, Hatteland, Netwave and Rutter. Alphatron Marine Belgium is the official Belgian importer of the brand JRC. This branch handles a large portion of the service and sales in the Belgian ports.
Alphatron Marine also has an office in Le Havre, France to serve and support the southern region.
• automation systems • Belgium • Cobham