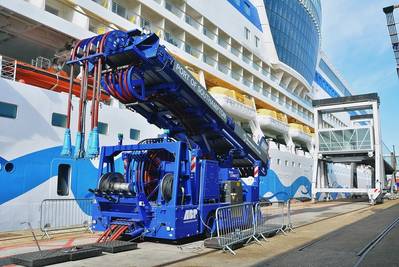 AIDAcosma, AIDAprima and now AIDAsol have all undergone commissioning, meaning that when these cruise ships return to the port, they are able to ‘plug in’ at Horizon Cruise Terminal or Mayflower Cruise Terminal.

“It’s fantastic to be able to facilitate this sustainability milestone for AIDA Cruises,” said Rebekah Keeler, Head of Cruise at ABP. “To commission three of its ships in such close succession shows real commitment from AIDA Cruises whilst also demonstrating the efficiency of the shore power process at Southampton.”

AIDAcosma was the first of the three ships to be commissioned, shortly after she arrived on her maiden voyage at the end of February. AIDAcosma is also the second ship for AIDA Cruises that can be powered by low-emission liquified natural gas (LNG ), which can be bunkered at the Port of Southampton’s Ocean Cruise Terminal.

AIDAprima and AIDAsol will run a number of Northern Europe itineraries from the Port of Southampton this summer.