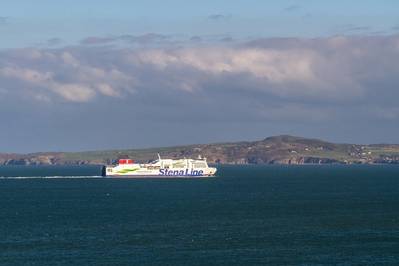 From his office overlooking Cherbourg docks, general manager Yannick Millet points to trailers destined for Ireland that belong to Amazon and FedEx, new customers and a signal of a potential big shift in post-Brexit trade.

Confronted by red tape and delays after Britain’s messy exit from the European Union, Irish traders are shipping goods directly to and from European ports, shunning the once-speedier route through Britain.

“You see the shift in supply chains right here,” he said.

All five operators connecting Ireland to mainland Europe have increased ferry services in the past nine months, with some bringing forward planned sailings and others moving larger ships away from quieter British routes to meet new demand.

Millet forecast Cherbourg would handle 9,000 trucks in January, equivalent to almost a quarter of what passed through the French port annually before the COVID-19 crisis.

For decades, the land bridge offered Irish traders the swiftest, most reliable route to continental Europe. It involves a short sea crossing between Dublin and Holyhead in Wales and then a hop between Dover and Calais. Every year 150,000 lorries would use the route.

But post-Brexit paperwork and delays in customs clearance are snarling up the process, adding hours or days to journeys and ratcheting up costs. Many companies are switching routes.

“This is a game-changer,” said Chris Smyth, commercial director at Ireland’s Perennial Freight. Demand was huge for freight space to ship to Cherbourg, Dunkirk, Rotterdam and Zeebrugge, he added.

Cherbourg’s business before Brexit had been evenly split between Ireland and Britain. Now, the port would orient itself towards Ireland, Millet said.

“I thought traffic would double but it has tripled,” he said. “The question now is whether the traffic volumes we see today will hold in the months to come.”

Avoiding the middleman
Stena Line, the largest Irish Sea operator, has doubled its services on the booming Rosslare-Cherbourg route, temporarily cancelling some sailings to Britain after freight volumes fell 60% in the first half of January.

Irish Ferries has deployed a larger vessel out of Dublin and planned to add more weekly rotations next month, the Port of Cherbourg said. Brittany Ferries also brought forward a planned sailing linking France and Ireland.

“We’re blown away by the demand,” Coffey said.

No one knows if the shift is permanent.

The Irish Maritime Development Office, a government shipping promotion body, said a return to pre-Brexit logistic chains would depend on the speed of customs formalities along the land bridge and that ferries linking Ireland and mainland Europe could not replicate its volumes.

Eddie Burke, a senior official at Ireland’s transport department, said the route through Britain would undoubtedly come back into play again.

Ferry operators were taking decisions on capacity week by week, said Ole Bockmann, Stena’s operations chief in Cherbourg. Reverting to land bridge routes was simple, he said. “We just take the ships off and go back to the old system.”

Renaissance
It gives ports like Cherbourg and Ireland’s Rosslare a narrow window to persuade traders that the longer sea crossing between Ireland and mainland Europe is commercially viable for just-in-time logistics.

Eighteen months ago, Rosslare on the southeastern tip of Ireland was struggling. Its traffic volumes were stagnant while rivals were enjoying a 10-year run of growth.

Now its general manager, Glenn Carr, is fending off complaints about the number trucks passing through after freight traffic increased 500% in the first half of January.

Carr said the old perception that direct crossings from Ireland were too long for fresh food and just-in-time supply chains was changing. Many of the companies that had switched from the land bridge would remain, he forecast.

“I was talking to some multinationals only this week and the question they asked me was, ‘Glenn, are you putting on more services?’”

An 18-hour ferry ride away, Cherbourg port’s Millet said his immediate priority was responding to shipping companies demands for better restaurants and washrooms for truckers and ironing out quayside glitches in the loading of extra vessels.

“Brexit has for us been an opportunity to rethink our port,” he said.