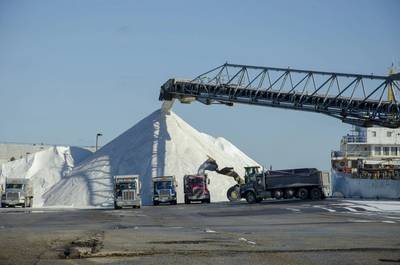 The 2019 shipping totals were the highest since 2007 during a period that saw the highest tonnage in the past 30 years; 2006 saw 2.55 million tons shipped through the port. The common denominator during both periods of time is a robust economy. The recently-concluded shipping season saw 2,254,674 tons of cargo move through the Port, an 8% increase over the previous season.

“It is interesting how the port has changed since the 2006 and 2007 shipping seasons that saw 2.32 million tons and 2.55 million tons moved,” said Dean Haen, Port of Green Bay Director. At that time the economy was also cooking along. In 2007, the port saw more than 1 million tons of coal moved. In 2019, with the low cost of natural gas, manufacturers and others have moved away from coal and coal shipments have shrunk to 407,000 tons a decrease of 62%.” In 2007, the port was also moving fuel oil, tallow, liquid asphalt and pig iron.

Haen says the changes in 2019 that contributed to the high tonnage include the import and export of petroleum products (gasoline, diesel and ethanol) that was not occurring in 2007. This is due to the closure of the West Shore pipeline and U.S. Venture’s original interest in exporting petroleum products to the east coast of North America. With the pipeline closure, the region is fortunate U.S. Venture built their Port facility. U.S. Venture continues exporting Wisconsin-made ethanol to the east coast, but they have switched from exporting to importing diesel and gasoline by ship to meet the regional demand. The low cost of moving goods by ship is keeping regional fuel costs lower than it would be otherwise if petroleum products were only moved by truck and train.

Due to the high Great Lakes water levels, a total of 177 vessels moved through the Port of Green Bay this shipping season, three vessels shy of the total from a year ago.