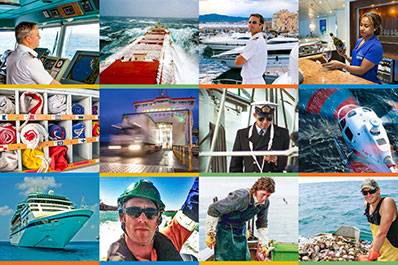 A worldwide shortage of more than 42,500 ship officers is expected by 2019, prompting New Zealand’s maritime industry and Maritime NZ to collaborate in an effort to encourage young people to train for maritime careers.
Maritime NZ’s Director, Keith Manch, said with the large shortfall in officers, competitive salaries (Masters of large vessels earn $250,000 a year, according to Maritime NZ), and more than 90 percent of the world’s goods being transported by sea, it’s a good time to start a maritime career.
Along these lines, Maritime NZ has launched its #NZcareersatsea initiative to showcase the benefits of maritime careers.
“Our #NZcareersatsea promotion is aimed at mobilizing mariners to show off their careers and encourage young people to see that maritime careers are exciting and well paid,” Manch explained.
The theme for this year’s World Maritime Day (Thursday, September 24) is maritime education and training.
“Our country’s [maritime] training is internationally recognized and well-regarded by employers all over the world,” Manch said. “It gives young men and women great opportunities for local, national and international careers.”
#NZcareersatsea and World Maritime Day will be celebrated at a maritime industry function in Wellington on September 16. It will include information on social media, websites, port visits, maritime school open days, advertising and news media.
Martitme NZ has created an online photo wall for people in the maritime industry to post pictures of themselves and tell their stories (http://www.maritimenz.govt.nz/wmd). The wall also links people to details about how to train for those jobs on the Careers New Zealand website (http://www.careersnz.govt.nz).
“There is huge variety of work, career and lifestyles in the maritime industry including: deck hands, technical crew, ships officers, navigators, hospitality, stevedores and business,” Manch said.
In New Zealand, some examples of maritime work include coastal shipping, Cook Strait ferries, fishing, tourism, offshore oil and gas and more. Many Kiwis work on cruise ships, luxury yachts and merchant ships travelling the world using qualifications earned in New Zealand. Others go home each night after work, and there are jobs that involve living on board for a week at a time and then a week at home off-duty. There are also careers on shore after having been to sea and for overseas-based shipping companies operating in New Zealand.
• Cook Strait • Keith Manch • Maritime NZ