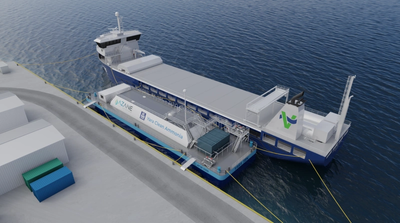 Norway's Yara and Azane Fuel Solutions have signed a deal to create a Scandinavian network of bunker terminals to supply ships with zero-carbon ammonia as marine fuel, the companies said on Friday.

They said the network will make "green" ammonia - produced from renewable electricity - available for the shipping industry in the region by 2024, which is also when the first ships with ammonia-fueled engines are expected to enter the market.

A hydrogen-carrying chemical primarily used as a fertilizer, ammonia is one of several candidates to become the shipping industry's preferred zero-carbon shipping fuel.

"These bunkering terminals are key pieces in the puzzle that must be in place to ensure reliable and secure ammonia supply as zero-emission fuel," Magnus Krogh Ankarstrand, head of Yara's Clean Ammonia unit, said in a statement.

The terminals will be both land-based and floating, Yara said. It provided no detail of the cost of the project or how many terminals it planned to set up.

Yara aims to cut all CO2 emissions from its ammonia plant in Porsgrunn in southern Norway by switching to renewable electricity from natural gas as a feedstock. It also has green ammonia projects in Australia and in the Netherlands.