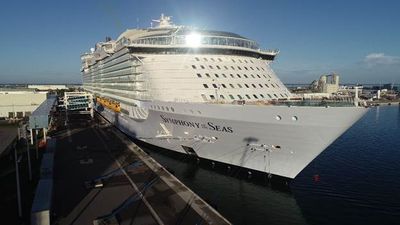 “We’re proud of the confidence our partners at Royal Caribbean have in us. Although this ship will be home-ported in Miami, our cruise partner trusted the capabilities of this port for its first U.S. port of call,” said Port Canaveral CEO Capt. John Murray. “As a brand-new ship, coming from a foreign port, it’s important that the customs clearance and Coast Guard inspection operations run smoothly and efficiently to avoid time delays and preserve a positive guest experience.”

After crossing the Atlantic, the cruise ship, which has a capacity of 6,680 passengers and 2,200 crew members and cost more than $1 billion to build, Symphony of the Seas arrived at Port Canaveral to clear customs and undergo the required U.S. Coast Guard port state control inspection. The Symphony has been sailing Mediterranean itineraries from Barcelona, Spain, since making its maiden voyage on April 7th. About 5,500 passengers and all crew members were required to disembark the cruise ship at the Port and clear customs.  Re-boarding of passengers was phased, with crew members returning to the vessel first, and while passengers remained ashore during the inspection process. Many cruise guests enjoyed excursions to Kennedy Space Center or shopping at historic Cocoa Village, while others chose to re-board the vessel and enjoy the many amenities aboard Symphony.

Symphony departed Port Canaveral on schedule this afternoon, and is set to arrive tomorrow in Port of Miami. Two tugboats from Petchem Tugs and Seabulk Towing escorted the Symphony from Port Canaveral with a traditional water salute.

Symphony is Royal Caribbean’s 25th ship in its fleet and its fourth Oasis-class vessel. It joins the two-year old Harmony of the Seas, the Oasis of the Seas, which debuted in 2009 and currently is homeported at Port Canaveral, and the Allure of the Seas, which began service in 2010. The 18-deck Symphony outweighs the Harmony, the previous record holder, by about 1,000 gross tons and has more cabins than the Harmony.