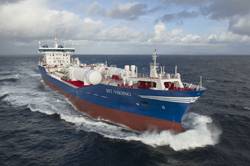 The "Bit Viking" during sea trial.

The Bit Viking is reportedly the world's first vessel in service whose main machinery has been converted to burn LNG as fuel. She is also the largest commercial vessel which is not an LNG tanker, to use LNG as fuel. After the conversion which was undertaken under the supervision of classification society Germanischer Lloyd (GL), the 25,000 dwt product tanker successfully completed sea trials. Owned by Sweden's Tarbit Shipping, "Bit Viking" now qualifies for lower nitrogen oxide (NOx) emission taxes under the Norwegian government's NOx fund scheme, due to substantial reductions in her carbon emissions.
Delivered in 2007 by China's Shanghai Edwards shipyard, the "Bit Viking" is built with double engine rooms, propellers, steering gears, rudders and control systems. Having previously been powered by two 6-cylinder in-line Wärtsilä 46 engines running on heavy fuel oil, the conversion has changed these to 6-cylinder in-line Wärtsilä 50DF dual-fuel engines operating on LNG, supplied by two 500 cubic meter LNG storage tanks on the fore deck.
During the conversion the vessel was fitted out with the new equipment necessary for the LNG operation. GL experts played a critical role by safeguarding the components manufactured and installed in the system - the piping, valves, safety equipment, and the tanks themselves - ensuring that they were all safely constructed, using the right type of materials and right type of welding.
The technical challenge in the conversion process was immense, says Ronnie-Torsten Westerman, Business Development Manager at GL. As a world first, the project required special attention on how to interpret the relevant class rules and how the flag administration would understand and accept the risk analysis. Says Westerman: "Special attention was given to the bunkering process and how it should be performed, since this is a critical operation and requires special expertise and equipment."
The conversion of the Bit Viking was also a good opportunity to evaluate whether GL's own rules for gas as ship fuel would prove up to the task. After the successful conversion Ronnie-Torsten Westerman is optimistic: "The existing rules are sufficient to cover such a conversion, as the "Bit Viking" underwent."
Within the short period of operation since her conversion, the Bit Viking has already achieved considerable benefits for the environment: greenhouse gases reduced by 20% to 25%, sulphur output cut entirely, NOx gases were cut by 90% and particulate emissions reduced by 99%. An official emissions measurement has been conducted, but the final results are not available yet. "However, these figures are a strong indicator of the outcome", says Ronnie-Torsten Westerman.
The Bit Viking recommenced commercial trading on 25 October 2011. Ever since, she has been performing as expected and the crew has successfully bunkered her from the shore facility at Risavika, South of Stavanger. The Bit Viking is trading along the entire length of the coast of Norway, from Oslo to Kirkenes, on behalf of oil major Statoil.