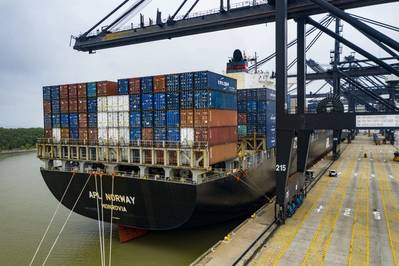 Port Houston reported a dip in container volumes for the month of February after a severe winter storm shut port facilities for nearly a week, bringing cargo movements to a virtual standstill.

The lethal storm and impact of sub-freezing temperatures on both commerce and activity at Port Houston resulted in a tough month as vessel calls and terminal activities were suspended. Port Houston—the dominant container port on the Gulf Coast and sixth largest in the U.S.—handled 198,763 twenty-foot equivalent units (TEUs) in February of 2021, compared to 255,474 TEUs in February 2020. That brought container activity for the year to 453,802 TEUs, down 13% compared to the record 524,247 TEUs for the same period in 2020.

The port's executive director, Roger Guenther, said the decision to halt operations due to the treacherous storm was made to err on the side of safety to ensure the wellbeing of employees, longshore workers, truckers and others.

“It was a people issue first and foremost,” Guenther said. “Ensuring the safety of our team and partners was our top priority. Icy conditions made it dangerous to operate. There were some issues with power generation in parts of our system, but we were able to get back to 100%. As soon as we were able to safely be up and running, we again began moving cargo with the world-class service our customers have come to expect from us. As our employees and members of labor have proven so many times in the past, we are resilient and we’re confident that our regional growth and strong manufacturing sector will continue driving strong demand in the months ahead.”

Although steel volumes were down due to the continued downturn in the oil and gas sector, those volumes are expected to begin to increase, Guenther noted: “We are hopeful that tonnage will begin looking better in the months ahead, with energy prices on the rise that may spur an increase in drilling activity and demand for pipe.”