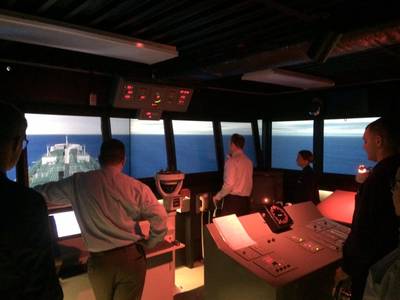 Thousands of migrants seeking refuge have lost their lives attempting to make their way across the Mediterranean Sea in overcrowded and unseaworthy boats. The United Nations estimates that as many as 850,000 refugees may attempt to make the trip between 2015 and 2016.

Although most of the rescues have been handled by Coast Guard agencies in the region, merchant vessels often are being brought in to assist. Between 2014 and 2015, an estimated 1,200-plus merchant vessels were diverted to assist in the rescue of thousands of migrants making a desperate bid to reach Europe.
On Tuesday, March 8, the United States Maritime Resource Center (USMRC) held a senior-level crisis management exercise using its suite of ship simulators to explore the response and coordination actions required by merchant vessels called in to assist in a rescue at sea of unsafe migration activities. The exercise was held in concert with the U.S. Department of State - Overseas Security Advisory Council’s (OSAC) Maritime Security Working Group. To promote virtual participation, USMRC broadcast the exercise live to nearly 20 virtual participants using OSAC’s webcasting tool. This capability allowed MSWG members to participate in the exercise remotely, from any internet-enabled device. This exercise was the first OSAC maritime exercise conducted in a virtual format.
“The scenario for the exercise challenged participants to examine potential options and their associated risks in response to a distress call for a vessel carrying migrants in the Mediterranean Sea region,” said USMRC President Brian T. Holden. “We are leveraging our expertise in employing maritime simulation as a tool to identify risk mitigation strategies in marine operations and applying it to the migrants-at-sea crisis. We know the maritime industry is concerned and that is why we have taken the lead in promoting awareness of best practices for the safe rescue of migrants by merchant vessels.”
Participants had the opportunity to experience a simulated distress call from a migrant vessel and a rescue coordination center call while on a ship’s navigation bridge at sea. This simulated scenario was derived from interviews with shipping companies and ship masters who have responded to actual migrant rescues.
As part of the preparation for this simulated scenario, participants heard firsthand from a ship master who had performed one of these rescues and whose experience the scenario was based upon. The goal was to help them better understand the challenges involved and what goes into the decision-making process of a ship’s Master and senior officers. The day-long exercise included a number of breakout sessions including how human migration at sea is being handled today and how it will be handled in the future.
Members of the Maritime Security Working Group representing different sectors of the maritime industry were on hand to discuss concerns and policies for responding to a migrant rescue including how to accommodate those being rescued, how those rescues will impact cargo delivery and the costs and risks that result.
“The migrant crisis shows no sign of slowing and any merchant vessel operating in the Mediterranean region faces the possibility of being called into action,” said Holden. “We believe our knowledge and expertise in the area of marine operations and developing risk mitigation strategies can help those involved to better understand the risks they face, how to prepare in the event they are called into service and if the time comes, how best to coordinate a migrant rescue at sea.”
• Europe • Mediterranean • Mediterranean Sea