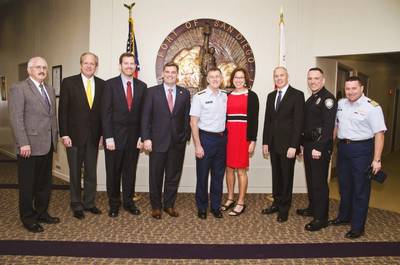 Admiral Paul Zukunft, Commandant of the United States Coast Guard, visited the Port of San Diego’s administrative offices on February 12. The Commandant was in town to participate in the 2015 Armed Forces Communications & Electronics Association /U.S. Naval Institute Conference held at the San Diego Convention Center.
During his visit to the port, the Commandant participated in a briefing that included Dan Malcolm, Chairman of the Board of Port Commissioners; Acting President and CEO John Bolduc; Acting Chief of Harbor Police Mark Stainbrook and other senior Port staff members. The Commandant's spouse, Fran DeNinno-Zukunft, accompanied him. She is the Ombudsman-at-Large for the United States Coast Guard. Also attending the briefing was Captain Jonathan Spaner, Coast Guard Sector San Diego Commander.
"Ninety percent of commerce moves through seaports," said Admiral Zukunft. "For the coast guard, it is about how we manage, safeguard and regulate maritime activity while facilitating commerce and ultimately our economic security."
Admiral Zukunft thanked the port for its collaboration with the coast guard. The port works closely with the coast guard maritime security and safety team for training and exercise support. The team also leases space from the port in National City for operations. Additionally, the port shares space with the coast guard in the joint harbor operations center, located at the coast guard station on San Diego Bay.
Following the briefing, the Commandant and Mrs. DeNinno-Zukunft received a tour of the port's Tenth Avenue Marine Terminal which, along with the National City Marine Terminal, is used periodically for strategic military operations. As one of 17 strategic military ports within the United States, the Port of San Diego assists the military with important load-in and load-out operations that allow important equipment and supplies to be shipped out to where they are needed.
• United States Coast Guard • Paul Zukunft • United States