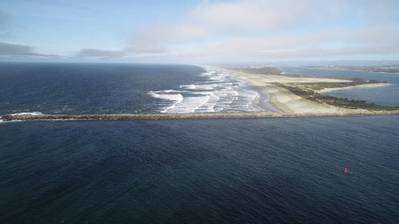 The Oregon International Port of Coos Bay received notification from House Transportation and Infrastructure (T&I) Committee Chairman Peter DeFazio that the United States Army Corps of Engineers (USACE) included $32.7 million in their FY2022 disaster relief supplemental appropriations workplan to support repairs to the North Jetty. The Jetty has been losing approximately 20 feet per year, which has resulted in its receding a total of 900 feet since its original construction design. The jetty’s construction was completed in 1929.

Jetty infrastructure on the Oregon coast has historically been underfunded, leading to increasingly unsafe navigation for mariners. “Our jetties serve as the protectors of the mouths of our harbors and are necessary to ensure the safety of our bar crossings,” said John Burns, Port of Coos Bay CEO. “Thanks to Chairman DeFazio’s longstanding fortitude and commitment to champion repair of the North Jetty, safety in navigation in the Coos Bay harbor will be greatly improved.”

The shortening of the jetty’s length has been exacerbated by extreme storm events over the past several years. This loss of jetty length not only increases the risks of dangerous conditions within proximity of the ocean bar crossing but it also undermines the jetty’s primary function of protecting the channel and ensuring the efficiency of the dredging cycle. The USACE project will include the addition of approximately 120’-150’ in jetty length, stabilization of the head of the jetty, and addition of rock to the jetty’s trunk and root to further stabilize the structure.