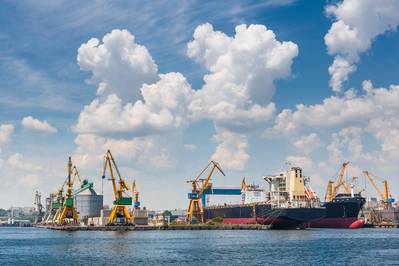 Ukraine has sent around 80,000 tones of grains to the Romanian Black Sea port of Constanta so far, with more expected to arrive, the port's manager said on Tuesday.

Ukraine's sea ports have been blocked since a Russian invasion two months ago and the country, a major agricultural producer, has been forced to export by train via its western border or via its small Danube river ports into Romania.

"There are around 80,000 tonnes of grains which have already arrived, they are stored in silos, a part of them were loaded on ship," Constanta Port manager Florin Goidea told Reuters.

"Another roughly 80,000 tonnes are approved and en route."

The grains arrived either by rails or on barges through the Danube river, Goidea said, adding the port had the capacity to handle exporting additional grains exports.

The port, which has a storage capacity of around 2 millions tones handled exports worth some 24 million tonnes last year.

Earlier this month, Transport Minister Sorin Grindeanu said the government, which has waived port services fees for Ukrainian cargo, plans to re-open a Soviet-era train track at its port of Galati on the Danube river, which would help speed up grain transports. It was unclear when the track, which needs rehabilitation, would re-open.

Ukraine's railway network uses a Russian gauge measuring roughly 1.5 meters, or some 10 centimeters more than the tracks used in most of Europe.

On Monday, analyst APK-Inform said Ukrainian border guards last week closed several shipping lanes at the mouth of the Danube river due to drifting mines in the Black Sea.

"This is the real big chance for Danube river to become even more economically profitable, important and to better connect Black Sea region countries with western European countries in terms of trade," he said.