Ukraine Could Lose $6 Billion in Grain Exports with Ports Blocked 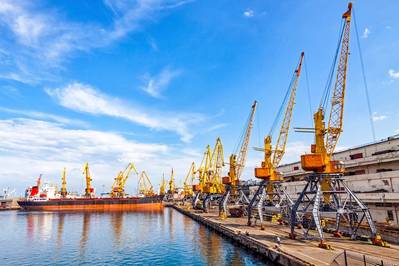 Ukraine faces a possible grain revenue loss of $6 billion as the blockade of its ports by Russian forces prevents it from selling millions of tonnes of wheat and corn that had been earmarked for export by June, a senior industry official said.

Countries that rely on imports of Ukrainian wheat - including Egypt, Turkey and Yemen - will need to find alternative supplies, aid agencies have warned.

Ukraine, a major producer of grain and oilseeds, exports 98% of its cereals through its ports and only a fraction by rail, where costs are higher.

The country was the world's fourth largest grain exporter in the 2020/21 season while Russia ranked third, International Grains Council data shows. The two countries combined accounted for 22% of global exports.

But with Russian warships off Ukraine's southern coast preventing cargo ships from leaving the ports, including the major hub of Odesa on the Black Sea, grain exports have all but ground to a halt since the start of the war on Feb. 24.

"We are sitting on a potential loss of $6 billion," Mykola Gorbachev, chairman of the Ukrainian Grain Association, told Reuters.

He said the country had around 20 million tonnes of wheat and corn still to export from the 2021/22 season, which ends in June, at an average price of around $300 per tonne.

He said there was no way Ukraine could transport that kind of volume by train, as the railway had a throughput capacity of some 600,000 tonnes per month, a tenth of what ports handled before the war.

in 2021, making up about half of its total export income.

"Now we are just losing this sector," Gorbachev said.

The World Food Programme said on Friday that food supply chains in Ukraine were collapsing, with key infrastructure such as bridges and trains destroyed by bombs and many grocery stores and warehouses empty.

Russia, which has been hit by Western sanctions and has imposed export curbs, had been the world's top wheat exporter in 2020/21 but may lose that mantle to the European Union in the current 2021/22 season, according to IGC forecasts.

While Ukrainians who are not trapped in besieged cities like Mariupol or Kharkiv in the east are not at an immediate risk of food shortages, the war could disrupt agriculture for a long time.

Gorbachev said Ukrainian farmers may also be thinking twice before sowing new crops out of fear for their safety but also because their grains could go unsold if the war continues.

Ukrainian farmers - who produced a record grain crop last year - say they are short of fertilizer for the dormant winter wheat planted last autumn, and they also lack sufficient fuel to power their equipment.

Meanwhile the new crops of corn and barley must be planted over the next month or it will be too late, Gorbachev said.

At the weekend, presidential adviser Oleh Ustenko said Ukraine may not produce enough crops to export if the invasion disrupts this year's sowing campaigns.

"Ukraine has enough grain and food reserves to survive for a year, but if the war continues ... (it) will not be able to export grain to the world, and there will be problems," he said.