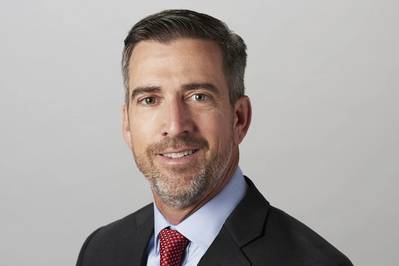 Tim Nolan, who was recently named the next President and CEO for TOTE Inc, was honored with the Herb Brand Award at the Maritime Council of NY/NJ’s 56th Annual Dinner Dance.

The Herb Brand award is one of three awards given to champions of the U.S. maritime industry. Other recipients of this year’s awards were Congressman Cedric Richmond for the Government “Man of the Year” Award and Randi Weingarten President of the American Federation of Teachers who received the Paul Hall Award.

The awards are given to leaders in the government, business and industry communities whose efforts and engagement have championed and strengthened the U.S. Maritime community over the last year. Both Nolan and Weingarten, along with their organizations, were instrumental in delivering relief from the U.S. mainland to Puerto Rico following Hurricane Maria in 2017.

In his acceptance remarks Nolan noted, “When Hurricane Maria made landfall last September, it was devastating to the people and communities of Puerto Rico. . . It was at this time that I [also] experienced one of the proudest moments of my career, as the U.S. Maritime Industry was one of the first to stand up and support the island in its time of need. In that moment, every person that is a part of making the U.S. maritime industry so strong came together to support the island. . .The collective response to Hurricane Maria is what makes the U.S. Maritime Industry great. And I am honored and proud to be a part of this community. Through our collaboration and teamwork, we demonstrated that the U.S. maritime community is unlike any other.”

Nolan will begin in this new role as President and CEO for TOTE Inc on July 16.