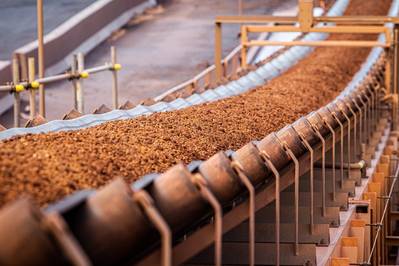 Rio Tinto's Guinea subsidiary has formed an infrastructure joint venture with Winning Consortium Simandou (WCS) and the government, paving the way for work to resume on the world's largest undeveloped iron ore project.

The joint venture (JV) for the Simandou railway and port is a milestone for Rio and WCS, whose shareholders include a unit of China Hongqiao, but the firms said they must still negotiate final JV agreements, without giving a timeline.

A source with direct knowledge of the matter said the JV partners would meet later on Thursday to start hashing out the agreements.

In a concession to Guinea's military junta, the companies gave the government a 15% free stake in the JV, La Compagnie du TransGuinéen, meaning it does not have to contribute to the capital required to build the infrastructure.

The junta, which took power in a coup last September, on July 3 ordered all work on the Simandou project to stop, frustrated with the companies' pushback over the government stake.

"The Republic of Guinea reassures the partners, and the world of its firm will to develop the Simandou project in the best interests of the people of Guinea, and all partners," said Djiba Diakité, chairman of the government's committee on Simandou.

The consortium, which has 15,000 employees including subcontractors and expatriates, put many of its workers on forced leave after the government-ordered halt.

The source said WCS' workers would remain on forced leave until the final JV agreements were finalized.

WCS did not immediately respond to a question about the forced leave.

WCS and Rio's subsidiary Simfer Jersey Limited each hold 42.5% of the new company, which will be "central" to the "co-development" of the more than 600 km-long railway and the port being built to export ore from Simandou, in Guinea's remote southeastern corner, the JV partners said in a statement.

This is also a step towards securing the necessary financing for the infrastructure, they said.

"We are extremely grateful to our joint venture partners, the Guinean government and Rio Tinto Simfer for the spirit of cooperation they have shown in achieving this major milestone," said WCS Chairman Sun Xiushun.

The companies said they were committed to developing the infrastructure "in line with internationally recognized environmental, social and governance standards".

The railway will slice through ecologically sensitive areas including habitats for critically endangered chimpanzees, and is expected to create significant socioeconomic change by connecting remote regions of the impoverished country to the port in Forecariah district, about 80 km south of the capital, Conakry.

Rio and WCS have said they would eventually open the railway to passenger services, though this was not mentioned in Thursday's statement.

Rio Tinto has held rights to Simandou blocks 3 and 4 since 1997 through Simfer S.A. which is owned by the government of Guinea (15%) and Simfer Jersey Limited (85%), itself a joint venture between Rio Tinto (53%) and Chalco Iron Ore Holdings (CIOH) (47%).

CIOH is held 75% by Chinalco, 20% by Baowu, with China Rail Construction Corporation and China Harbour Engineering Company each holding 2.5%.