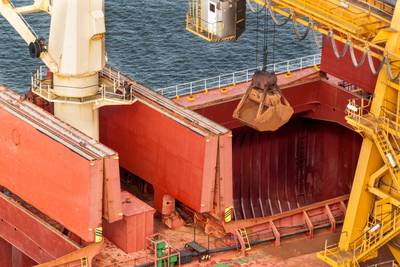 Rio Tinto on Friday posted a 3% drop in iron ore shipments in 2019 as the Anglo-Australian miner's operations faced disruptions due to cyclone and a fire at a port facility.

The company said it made up for the disruptions in the first half by way of higher iron ore production and shipments than a year earlier. However, in the fourth-quarter, shipments of the steel-making material dipped 1% to 86.8 million tonnes.

The global miner has benefited from a jump in iron ore prices following a supply squeeze due to a fatal dam collapse in Brazil early last year. But with global production now stabilizing, the prices are off their highs.

The company expects iron ore shipments, which accounts for more than 60% of its profit, to be between 330 million tonnes and 343 million tonnes in 2020.

Rio Tinto has been shipping out higher volumes of a lower grade, 60 percent SP 10 product, as it struggles with operational bottlenecks at its new Koodaideri mine in Western Australia, from where it expects to produce ore in late 2021.