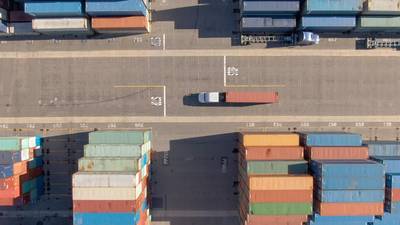 On January 6, the Federal Maritime Commission announced an “Order of Investigation and Hearing” against Wan Hai Lines, Ltd, a vessel-operated common carrier (VOCC). The order charges that Wan Hai failed to “establish, observe, and enforce just and reasonable regulations and practices relating to its assessment of charges on containers when return locations with corresponding appointments were unavailable.”

For FMC, a core issue is that some companies may be taking advantage of U.S. port congestion because established VOCC-truck operations are not working. FMC explains that VOCCs notify truckers via email regarding the terminal location of a container. Most terminals require an advance appointment, made by the trucker, for pickup or drop-off. However, terminals frequently limit certain chassis to certain days. “As a result,” the Order writes, “to successfully return a container within free time, a shipper or its trucker must determine where the VOCC will accept the container, if the terminal will accept the chassis, and then secure an appointment at that location.”

Detention charges are an incentive to keep containers moving, to literally clear the market. However, recent port congestion has upended established processes. FMC writes that on some days there are no return locations or no appointments available or the terminal operator is not accepting containers on a particular chassis. “In this scenario,” FMC writes, “the trucker cannot return the container. The incentive to return the container is not enhanced by detention charges.”

FMC writes that Wan Hai charged detention improperly 21 times, with fees ranging from $125 to $1,550 per container. Wan Hai, FMC writes, refused requests to waive the charges because the company said it did not control the appointment system. The order will be assigned for hearing. FMC writes that this case “requires an expedited proceeding with the initial decision issued within six months.”