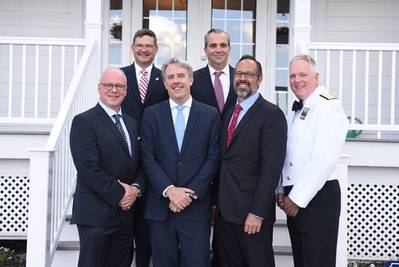 For years, SUNY Maritime College’s annual Admiral’s Scholarship Dinner has helped to raise support to fund student scholarships. This year, in addition to setting an attendance record, it also set a record for donations.

Jim Lawrence, chairman of Marine Money International and board member of Seamen’s Church Institute, welcomed the 650 alumni, parents and friends. The Admiral’s Scholarship Dinner raised $780,000, contributions that go directly to help students fund their studies.
“These scholarships help the college recruit the best and brightest students to Maritime College,” said Rear Adm. Michael Alfutis, president of SUNY Maritime. “I am deeply grateful for the support from the attendees and sponsors of this important event. In talking to and getting to know our students individually, I am continually impressed by their dedication, their energy and their potential as leaders. These young men and women represent the best of their generation, and they deserve all the assistance they receive.”
The funds will support approximately 230 scholarships next year.
The dinner also serves every year to honor outstanding alumni. This year, five alumni were honored: Kevin Graney ’86, president of General Dynamics/NASSCO; Bart Eckhardt ’79, president and CEO of Robson Forensic; and Russel Paret, Keith Zelinsky and Chris Hughes, all of the class of ’92, and founding partners of Dome Chartering and Schuyler Line Navigation.
After graduation, Graney joined the Navy’s nuclear power propulsion program and served for nine years. He pursued a career in shipbuilding with General Dynamics Electric Boat, working on submarines and the next generation aircraft carrier. He has been at General Dynamics/NASSCO since 2006 and serving as its president and CEO since January of this year.
Eckhardt sailed on his U.S. Coast Guard license before working as a design engineer on power plants and industrial systems. He got involved in forensic engineering and owned his own engineering business for several years before joining Robson Forensic in 2001. He has been the firm’s president and CEO since 2006.
After several years apart after graduation, Zelinsky, Paret and Hughes came back together to build Dome Chartering and Schuyler Line Navigation. Since the founding of the two entities, the three partners have expanded them a great deal. Dome represents owners and charterers around the world and is a commercial manager for several maritime companies. Schuyler Line specializes in the niche cargo preference and commercial markets and, with that focus, has risen to the fore in the U.S.-flag market.
The success of this year’s dinner was such that shortly after tickets went on sale, the demand exceeded the capacity of Maritime’s Mess Deck, where the dinner has historically been held. For the first time ever, the dinner was held off-campus at the nearby Marina del Rey.
• General Dynamics • industrial systems • Kevin Graney