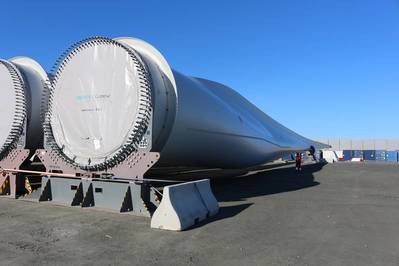 Some equations just don’t add up. For example, storing 500 offshore wind turbine blades at a site with only space for 400 (and that’s only if you don’t store the other key elements required to build a full turbine). Elaine Maslin visited Siemens Gamesa’s blade manufacturing facility in Hull, UK, to find out more.

Storage space is becoming a major challenge that’s looming for ports involved in the fast-evolving offshore wind industry. It’s already becoming a challenge for Siemens Gamesa Renewable Energy at its blade manufacturing facility in Hull, on England’s east coast. Opened only in 2016, the site is already having to expand its blade production capability, to meet demand. But it’s also seeing a point at which it will run out of space to store them, as projects ramp up in 2024.

The site is the largest blade manufacturing facility in the UK, producing blades for mega-projects like Hornsea Two, which will overtake Hornsea One as the world’s largest offshore wind farm when it comes online this year.

Blades for the 450MW, 54-turbine Neart na Gaoithe offshore wind farm, off Scotland, are being made here, as well as for the 38-turbine Kaskasi wind farm off Germany, SeaMade off Belgium and the 900MW Greater Changhua project in Taiwan.

Blade storage challenge
Since it was opened, the manufacturing site has churned out 1,700 blades, a number which can be a major challenge to handle and store at the Alexandra Dock site. This site has space for 240 blades; so long as nothing else, such as nacelles and towers, are stored on site, says Simon Muirhead, Logistics Coordinator, Siemens Gamesa Renewable Energy.

During Hornsea 2, every last bit of space at the site was used, as well as an overspill storage site, nearly 4km away (adding its own logistical challenges), at King George Dock, to allow for 180 blades, 24 nacelles and 100m-tall turbine towers to be assembled and stored, he says.

But now Siemens Gamesa is spending £186 million on a new manufacturing hall at the site and extending the existing hall, adding more than 41,000 sq m floor space (more than doubling the manufacturing total space). As well as increasing production capacity, this will enable the manufacturing of 108m-long blades from 2023. However, the expansion will take up a significant amount of the site’s already squeezed storage space. With output set to ramp up in 2024, with expected storage requirements to reach 500, it’s looking like it will be a squeeze.

Keeping up with demand
“We have to decide what we’re going to do in the next 12 months and plan out to five years, but everything changes quite quickly,” says John Shaw, Port of Hull Port Manager, Siemens Gamesa Renewable Energy. “Everyone is afraid to make investment early, because of (the pace of) change.” But, “Without significant investment we will struggle with storage space for blades,” says Shaw.

It’s a common thread across the industry, as it continues to outpace itself, as the Ports & Vessels Conference, held in Hull in April, heard.

108m blades on the horizon
Growth in activity at the Hull site since it opened has been marked, says Muirhead. When it opened, it was producing 75m-long blades. It’s now churning out 81m blades, with 108m blades coming and 115m on the cards after that. Like many in the industry, it’s hard to keep up.

Two vessels – Rotra Mare and Rotra Vente – converted in 2016 for the transport of blades, recently came back into service after their latest refits, in order to keep up with this growth; the Rotra Mare had to be chopped in half in order to add 11m to its length.

Blade handling
One of the biggest challenges at the port for Siemens Gamesa Renewable Energy’s port and logistics team is handling the blades around the site, as it’s rare that blades go straight out of the manufacturing hall and onto vessels. That means they need to be stored. When space runs out at the main site, they have to be moved to King George’s Dock. This involves a huge amount of time and effort.

Moving one blade to the site takes about an hour and a half and requires seven people, five of which, including the transportation system controller, are on foot – which isn’t much fun during cold, wet winter nights, says Muirhead. Road infrastructure at the port has had to be adapted to allow for these structures to be moved, which will only get more challenging as they get longer. It’s like Tetris – they have to be moved and positioned in order and to the right place, to get the maximum storage capacity and ensure the right ones going out in the right sets when needed – all of which means taking them back nearly 4km to the main site.

“It’s feast and famine,” says Shaw, reflecting how projects build up, the blades lined up across the site, before they’re all shipping and it’s empty again. “We need large open space with good ground bringing capacity.” 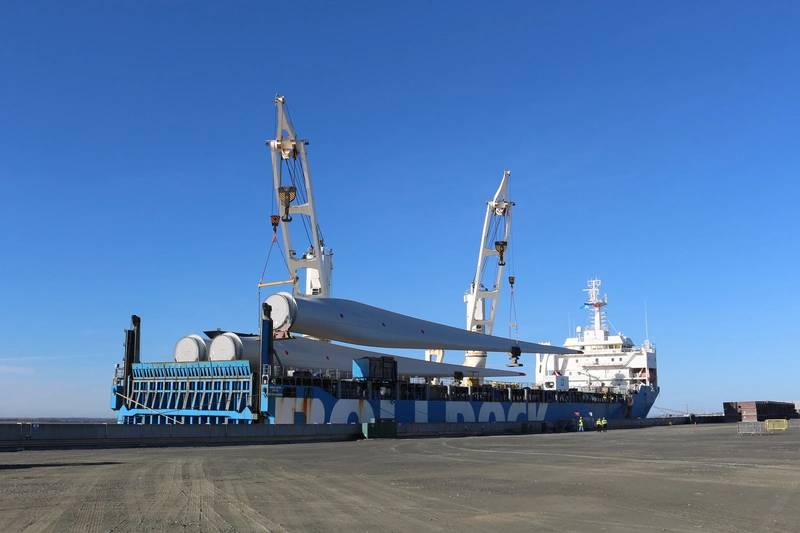 Blade stacking
The team is working with port owner ABP to get more space. But if that’s not possible, stacking operations could have to be looked at. It’s not an ideal, however, even over transporting the blades through the site. “That’s cranes, people, introducing risk, and cost,” says Shaw. “We could look at shipping them somewhere else, but that also adds cost.”

Shaw says they’re also looking at digital blade tracking capability, so it’s possible to see where are, where they’ve moved, how often they’re moved, all in a visual graphic. “With more data, we can identify more efficiencies, so we’re investing in setting that up,” he says.

It’s a site that never sleeps. During my visit, blades for EDF Renewables UK’s Neart na Gaoithe wind farm off Fife, Scotland, were being loaded out. They’ll be taken to Dundee and stored again before they’re taken offshore for installation. Six can be carried in the hold and another six on deck – enough for four turbines. But loading has to be in decent weather.

A global footprint
It's a growing market. As well as expanding its production facilities in Hull, Siemens Gamesa is increasing production elsewhere. It’s planning its first offshore wind turbine blade facility in the US, following signing a long-term lease with the Virginia Port Authority for a site at Portsmouth Marine Terminal, Virginia. It’s expected this will support Dominion Energy’s 2.6 GW Coastal Virginia Offshore Wind Commercial Project.

Back in Europe, Siemens Gamesa recently brought the world’s first combined offshore nacelle and blade facility into production at Le Harve. Its other main blade manufacturing facility is at Aalborg, Denmark, while nacelles are also built at Cuxhaven, Germany.