MSC Starts Clean up in Dutch Waters after Container Spill 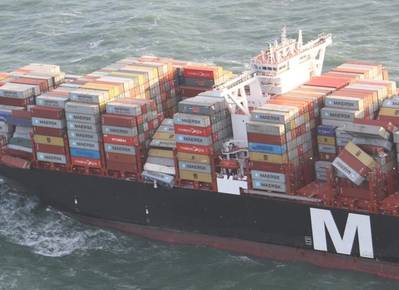 MSC has started cleaning up Dutch sea waters, 10 days after it lost nearly 300 containers from one of its largest cargo vessels in a storm.

"The clean up will likely take months," Dutch water authorities spokesman Edwin de Feijter said. "The largest part of the debris has been located, but there are still parts missing."

291 containers, some holding hazardous chemicals, fell off one of the world's largest container ships, the MSC Zoe, on Jan. 2 in German waters near the island of Borkum during a North Sea storm.

Two salvage ships left the harbor at IJmuiden, near Amsterdam, heading towards a container north of the tiny Rottumerplaat island, which is blocking an important shipping route between Germany and the Netherlands.

Work was planned to start at midday on Saturday, but rough weather looked set to delay the operation, De Feijter said, adding that 238 objects had been identified in the water so far.

"Those objects are not all entire containers, they can also be part of the cargo lost from broken ones."

Seventeen containers washed up on shore on the Dutch islands of Terschelling, Vlieland, Ameland and Schiermonnikoog, with the debris of many others littering the islands' beaches.

MSC, the world's no. 2 container shipping group, on Wednesday said it had made significant progress on the Dutch islands, with a total of 1,220 tonnes of debris collected so far.

Dutch authorities last week said they would hold MSC liable for the cost of cleaning up the waters.

Roughly 100 soldiers joined the clean-up operation last week, while local authorities and volunteers had already gathered up tonnes of waste from several kilometers of coastline.