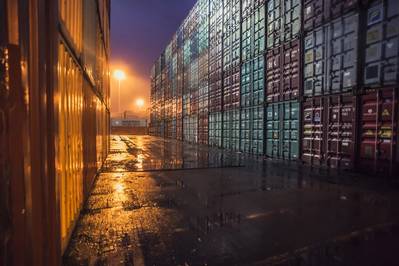 The coronavirus lockdown has accelerated a digitalization drive in a global shipping and logistics sector that still routinely delivers many documents by bike messenger in some countries, according to industry leaders.

Ports operator DP World said on Thursday it would join shipping company Maersk and other peers in a blockchain platform aimed at limiting the sector's costly paper trail.

"The situation around the coronavirus is a very good catalyst for making sure everyone in the supply chain can communicate with each other digitally," Mike Bhaskaran, DP World's chief operating officer for logistics and technology, told Reuters.

The Dubai-based company, one of the world's biggest port operators, plans to connect its entire business, including its 82 container terminals, using the blockchain technology.

The participation of key companies in the TradeLens platform, launched in 2018 by Maersk and IBM, is seen as crucial for cutting costs in an industry that has seen little innovation since the container was invented in the 1950s.

"The current circumstances have shown that digitalization of the logistic supply chain is picking up pace," Vincent Clerc, Maersk's chief commercial officer, said in an interview.

However, despite more than 200 ports, shipping lines, freight forwarders, port authorities and customs authorities having signed up, the platform has yet to reach a "critical mass" to make a significant impact, Clerc said.

In many African countries, Maersk relies on fleets of motorcycles known as 'boda bodas' to deliver documents between ports and shipping agents.

"The physical flow of documents with courier and local deliveries on bicycles, all of that will eventually go away," Clerc said.

It currently takes an average of 228 hours to get the necessary documents and stamps ready for shipping a container with citrus fruits out of South Africa.