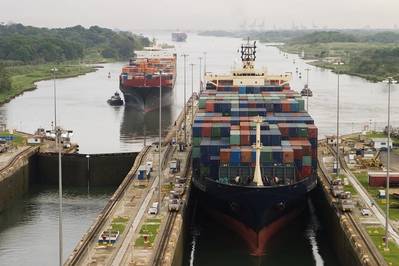 A new "freshwater" charge that came in this month to help the Panama Canal cope with climate change will cost the shipping industry up to $370 million a year, marking another blow for maritime companies already hit by fallout from the coronavirus.

The Panama Canal, one of world's busiest shipping routes, which handled nearly 14,000 transits last year, said last month it would introduce a charge from Feb. 15 of $10,000 for any vessel more than 125 feet long.

The canal, which relies on water from nearby Gatun Lake, has been hit by drought which affects water levels in the chokepoint. The Panama Canal authority also said it would bring in a variable surcharge based on the level of Gatun Lake to ensure the canal has enough water.

The authority said the charges were a consequence of a lack of rainfall and said this was a short-term measure needed to tackle the impact of climate change.

The International Chamber of Shipping (ICS), which represents more than 80% of the global merchant fleet, said on Thursday it was surprised by the charge after working with the canal authority on a separate increase in tolls which is due to come into effect in April.

"The industry is currently facing increased price pressures globally, as demand has been hit hard by the coronavirus and markets are adjusting to the new regulations on sulphur levels," ICS secretary general Guy Platten said, referring to new rules requiring ships to use cleaner fuel.

The coronavirus epidemic has upended supply chains and already disrupted shipping across the world leading to commercial losses for certain types of shipping, including container lines.

The industry is also having to pay billions of dollars in extra fuel costs due to the tough new sulphur emissions rules that started in January.

Platten said the global shipping sector was already operating "on the slimmest of margins".

"ICS calculates that at current water levels the ‘freshwater charge’ alone could cost global shipping $230 million. In a worst case scenario this could be as high as $370 million per year," he said.

"Cost hikes in this range, without sufficient warning, places undue pressure on the industry at a sensitive time when we are being asked to invest in a low emissions future," Platten said. He urged the canal authority "to rethink the hasty introduction".

A study last month estimated at least $1 trillion of investment in new fuel technology is needed to enable the shipping industry to meet U.N. targets for cuts in carbon emissions by 2050.