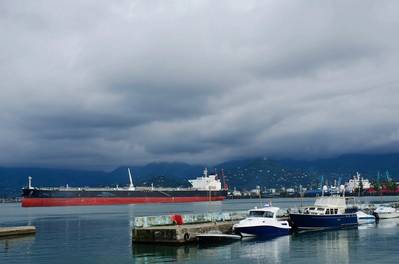 Oil and oil-related shipments from Georgia's Black Sea port of Batumi fell by 45.3 percent in the first eight months of 2018 from a year earlier, an official at the KazMunaiGas operated terminal said on Monday.

Some crude oil has been re-routed to the Baku-Tbilisi-Ceyhan pipeline and to the Caspian Pipeline Consortium this year, the official added, while some fuel oil has been sent to the port of Taman in Russia and Georgia's other Black Sea port of Kulevi.

The fall is partly because Azerbaijan prefers to send its oil through the pipeline or by rail in Georgia via its own terminal in Kulevi, rather than in Batumi, which is operated by Kazakhs.

January-August shipments of crude oil and refined oil products from Batumi totalled 815,776 tonnes, down from 1.491 million tonnes in the same period last year, the official, who asked not to be identified, said.

There were no shipments of crude oil, jet fuel, fuel oil and naphtha last month.

Shipments of crude oil and refined oil products from Batumi have been falling and totalled 2.109 million tonnes in 2017, down from 3.377 million in 2016.

Crude and refined oil products from Azerbaijan, Kazakhstan and Turkmenistan are shipped out of Georgia's Black Sea ports of Batumi, Supsa, Poti and a terminal in Kulevi.

Some products are transported across the Caspian Sea in small tankers, unloaded in the Azeri port of Baku and then sent by rail to Georgian ports for export to the Mediterranean.