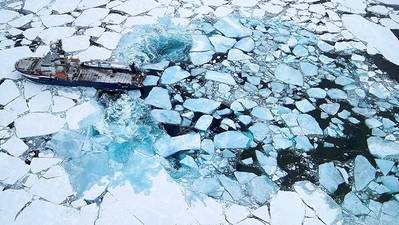 Fennica, an icebreaker vessel deployed by Shell in the Arctic (Photo: Arctia Shipping)

Royal Dutch Shell has abandoned its Arctic search for oil after failing to find enough crude in a move that will appease environmental campaigners and shareholders who said its project was too expensive and risky.

Shell has spent about $7 billion on exploration in the waters off Alaska so far and said it could take a hit of up to $4.1 billion for pulling out of the Chukchi Sea for the "foreseeable future".

The unsuccessful campaign is Shell's second major setback in the Arctic after it interrupted exploration for three years in 2012 when an enormous drilling rig broke free and grounded.

Environmental campaigners and shareholders have also pressured Shell to drop Arctic drilling. Some are worried an oil spill would harm protected species while others are concerned about the cost after oil prices more than halved in a year.

"Shell has found indications of oil and gas in the Burger J well but these are not sufficient to warrant further exploration," Shell said in a statement on Monday.

It said the decision to withdraw from the area reflected the results from the exploratory well, the project's high costs and the unpredictable federal regulatory environment in the area off the U.S. state of Alaska.

"The entire episode has been a very costly error for the company both financially and reputationally," said analysts at Deutsche Bank, who estimate the Shell's Arctic exploration project could cost the company about $9 billion.

"They had a budget of billions, we had a movement of millions. For three years we faced them down, and the people won," said John Sauven, executive director at Greenpeace UK.

Activists tried to interrupt Shell's drilling plans in July by blocking an icebreaker vessel as they dangled from a bridge.

The decision is also the latest in a series of setbacks for projects in the Arctic trying to find oil and gas deposits estimated at 20 percent of the world's undiscovered resources.

Earlier this year, Norway's Statoil postponed its Arctic Johan Castberg project again and in 2012 Russia's Gazprom, together with Total and Statoil, scrapped the Shtokman gas project in the Arctic Barents Sea.

Shell's London-listed shares reacted positively in early trading on Monday to the Arctic withdrawal, gaining up to 0.6 percent. The shares fell later in line with the oil and gas index.

"Alaska been a bone of contention for many investors thus today's update is a positive," said Bernstein analysts, who rate Shell's stock as outperform.

Shell said its Alaskan project was valued at about $3 billion on its balance sheet and that it had a $1.1 billion in future contractual commitments. It said it would give an update on the cost of writedowns with third-quarter results.