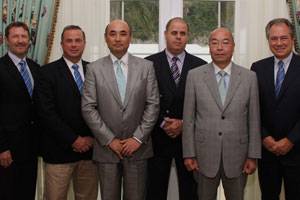 Seven directors were elected to the Board of the UK P&I Club at the AGM in Bermuda on October 26th.

Harley Franco, Chairman and CEO, Harley Marine Services, Inc founded his company in 1987 with a particular emphasis on environmental responsibility and corporate contribution to the community.  Franco was formerly an executive in the telecommunications industry and practiced law in the Seattle area. He is a former board member of the American Waterway Operators.

Hideyuki Takahashi, Director and Division Manager of Corporate Management Division, Nippon Oil Tanker Corporation joined the company in 1975. Formerly manager of the general affairs division, he undertook a series of senior roles in business administration and planning before being appointed to his current post.

Ron Widdows, Executive Director, Neptune Orient Line    joined the NOL Board in July 2008 on being appointed Group President and Chief Executive Officer. He is a member of the NOL Board Executive Committee and Approval Committee. Widdows was CEO of NOL's container shipping business APL from 2003, having joined that firm in 1980. Senior roles with APL have included responsibility for day-to-day operations including the line-haul and feeder fleets, global equipment management, procurement, terminals and alliance relationships; liner operations; and APL Americas’ operations and logistics.

Smain Larbi Ghomri, General Manager, Hyproc S.C. joined the company as engineer intendant in 1986. His diversified career with Hyproc has focussed on vessel maintenance, marketing, operations, financing, newbuilding and partnership structures in shipowning and ship management. For the past 15 years, he has specialised in LNG shipping and guided Hyproc through ISM and quality management projects and fleet expansion and development. After senior roles in the marketing and fleet management division, he was appointed to his current role in 1998.