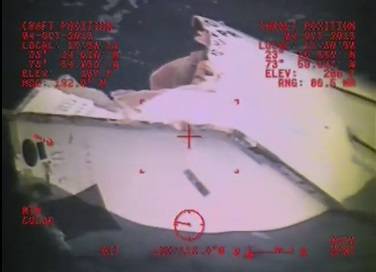 Responders continue the hunt for possible survivors from the missing cargo ship El Faro, which is believed to have sunk during Hurricane Joaquin.

As of Tuesday night, crews have searched some 172,257 square nautical miles while scanning in the vicinity of the ship's last known position 35 nautical miles northeast of Crooked Islands, Bahamas, the Coast Guard reported.
A decision on how much longer the search will continue could be announced on Wednesday afternoon, the Coast Guard said.
Officials acknowledged there is scant chance of finding survivors given El Faro disappeared in high winds and seas up to 50 feet.
The 790-foot-long ship was loaded with containers, as well as trailers and automobiles below deck when it went missing in heavy weather while en route from Jacksonville, Florida to San Juan, Puerto Rico. Tote Inc Chief Executive Officer Anthony Chiarello and other company officials said it is believed that engine troubles left the ship disabled in the path of the hurricane.
Of the 28 U.S. citizens and five Polish nationals aboard, the only trace of missing crew has been a deceased person in a survival suit located in the water Sunday.
Also found on Sunday was a heavily damaged life boat with markings consistent with those on board the El Faro, as well as a partially submerged life raft, life jackets, life rings, cargo containers and an oil sheen.
Airplanes, helicopters and vessels from the Navy, Air Force and Coast Guard are involved in the search, as well as commercial tugboats. Sea and weather conditions during Tuesday's search include one-foot seas and two-knot winds with 10 miles visibility.
Three Coast Guard cutters stayed on scene to search through the night.
National Transportation Safety Board officials began their investigation into the sinking on Tuesday, but say deep seas likely hinder chances of finding the ship and crew.

The Coast Guard and NTSB will hold a joint press briefing Wednesday afternoon to provide information on the search for the El Faro crew and the NTSB investigation.
• Air Force • Anthony Chiarello • Bahamas