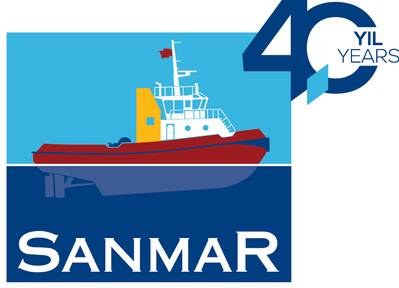 Tugboat builder and operator Sanmar Denizcilik is celebrating its 40th Anniversary this year. More than 150 tugboats benefiting from its wealth of experience are presently in operation on international seas, the company says.

It was in the year 1976 that Orhan Gürün, today’s company chairman, together with his dear friend, the late Gökçen Seven, incorporated Sanmar Denizcilik. Now celebrating its 40th Anniversary, Sanmar has developed into a force on two fronts, firstly as a tugboat operator and secondly as a tugboat builder with two modern custom built shipyards producing vessels for six continents.
Being one of Turkey’s oldest tugboat companies in the private sector has challenged Sanmar, resulting in a powerful fleet with an average age of less than two years. With up-to-date equipment and well-trained and experienced crew, Sanmar provides a huge variety of services in various ports and terminals around the coastline of Turkey and Bulgaria.
The tugs and workboats that Sanmar operates are constructed by the company’s own shipbuilding department. Over the last few years it has been bidding for new building contracts and has finalized a large proportion of them. The company now builds tugs, workboats and pilot boats for national and international markets on demand and has a track record of more than 150 state-of-the-art tugs on its reference list, including specialist ex-proof 90 metric tons BP units for oil and gas terminal deployment.
Sanmar has built tugboats for some of the world’s leading owner/operators –companies such as Østensjø, P&O, Smit Lamnalco, Svitzer and Buksér og Berging. By adopting and adapting the designs of tug designers such as Robert Allan, Buksér og Berging, many under exclusive agreements, Sanmar has helped raise the reputation of Turkish tug building. According to the shipbuilder, the more sophisticated the project, the greater is the likelihood that Sanmar will be awarded the contract, as exemplified by the construction of the world’s first pair of LNG fuelled tugs, for operation with Norway’s Statoil.
Today, under the leadership of the company chairman, Sanmar is in the capable and qualified hands of the children of the two original founders.
• Statoil • Svitzer • tugboat operator