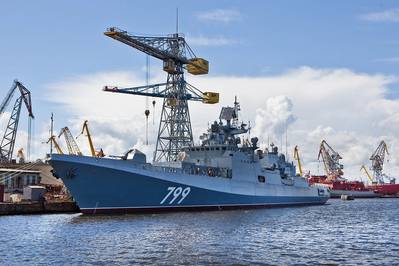 According to the shipyard, the acceptance/delivery certificate has been signed today, 25 December 2017, by Eduard Yevimov, Yantar Director General, and Capt 1 rank  Aleksey Poteshkin, Chairman of State Acceptance Commission.
Admiral Makarov was laid down in early 2012 in Kaliningrad and was launched in 2015 to commence sea trials. The vessel became the third Admiral Grigorovich-class frigate after Admiral Essen, which was commissioned in June.
Considering that the Makarov is very much needed by the Navy, there is a hope that we’ll raise the flag this year, TASS quoted Russia’s United Shipbuilding Corporation (USC) Head Alexei Rakhmanov as saying.
According to the USC chief, there is "actually 100% readiness" for the delivery of the frigate Admiral Makarov and it is important to hand it over this year so that the frigate’s crew can immediately start undergoing training and begin testing all the systems and practicing combat missions.
Under two contracts signed with the Russian Ministry of Defense, Yantar Shipyard is to build a series of six frigates of Project 11356 developed by the Northern Design Bureau. The Admiral Grigorovich and the Admiral Essen frigates were delivered to the customer in 2016.
• Russia • United Shipbuilding Corporation