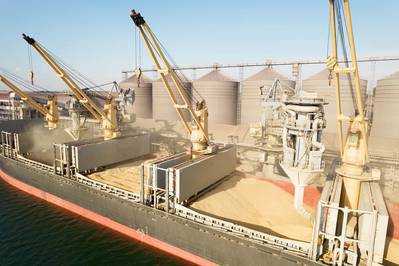 Ships exporting Ukraine grain through the Black Sea will be protected by a 10 nautical mile buffer zone, according to long-awaited procedures agreed by Russia, Ukraine, Turkey and the United Nations on Monday and seen by Reuters.

Since then Russia, Ukraine, Turkey and the United Nations have been working to hammer out written procedures in the hope that it will assure shipping and insurance companies enough to resume grain and fertilizer shipments from the Ukrainian ports of Odesa, Chornomorsk and Yuzhny.

"We very much hope it will increase the traffic under this initiative," said U.N. Secretary-General Antonio Guterres' spokesman Stephane Dujarric after the procedures were agreed.

The initiative has been operating in a trial phase for the past two weeks. Ten ships - stuck in Ukraine since the war started - have departed with corn, soybeans and sunflower oil and meal. Two empty vessels have traveled to Ukraine to collect shipments.

The biggest ship yet, the Ocean Lion, is due to leave the port of Chornomorsk on Tuesday to deliver 64,720 metric tons of corn to South Korea, said the Joint Coordination Centre (JCC) on Monday. The JCC in Istanbul oversees the deal and is made up of Turkish, Russian, Ukrainian and U.N. officials.

Commercial operation
Ukraine, along with Russia, is a major global supplier of wheat and other foodstuffs. However, the first ship to depart Ukraine under the U.N. deal last week is now looking for another port to unload after the initial Lebanese buyer refused delivery, citing a more than five-month delay. read more

The United Nations has stressed that the export deal is a commercial - not humanitarian - operation that will be driven by the market. All ships are required to be inspected to allay Russian concerns they could be smuggling weapons in to Ukraine.

Neil Roberts, head of marine and aviation at Lloyd's Market Association - which represents the interests of all underwriting businesses in the Lloyd's of London insurance market - told Reuters that the industry could now "play its part."

"The successful exit of multiple vessels was beyond the imagining of most people only a few weeks ago and to have come this far is extraordinary," said Roberts. "To actually achieve the goals of the U.N.'s initiative would be something for historians to reflect on."

Protection zone
The shipping and insurance industry wanted assurances of a secure journey with no threat of sea mines or attacks to their ships and crews. These are typically covered in standard operating procedures, which is what was agreed on Monday.

"The parties will not undertake any attacks against merchant vessels or other civilian vessels and port facilities engaged in this initiative," according to the 'procedures for merchant vessels' document.

One insurance industry source said the procedures "read as a reassuring set of rules. But will all sides stick to it?".

Under the agreed procedures, the JCC will provide information on the planned movement of ships through the maritime humanitarian corridor, which will be shared with Russia, Ukraine and Turkey's military to prevent incidents.

Then as the vessel moves through the maritime humanitarian corridor it will be protected by a 10 nautical mile circle buffer zone around it.

"No military vessel, aircraft or UAVs (drones) will close to within 10 nautical miles of a merchant vessel transiting the Maritime Humanitarian Corridor, excluding territorial seas of Ukraine," according to the document.

Ukraine's President Volodymyr Zelenskiy said there was "every chance" the pace of exports could be maintained.

"The key is how in the days to come our partners will prove able to prevent any attempts by Russia to disrupt exports and again further provoke a world food crisis," Zelenskiy said in a video address on Monday.

Russia has blamed Ukraine for stalling shipments by mining its port waters and rejects accusations Moscow is responsible for fueling the food crisis.