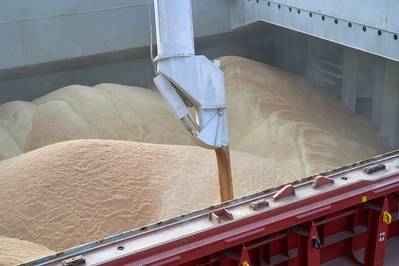 Russia plans to invest $500 million in the Syrian port of Tartus and build a grain hub there to boost its presence on Middle East markets, Interfax news agency cited Deputy Prime Minister Yury Borisov as saying on Tuesday.

Construction of the necessary infrastructure at the port, which Russia rented out for 49 years from Syrian authorities in 2017, could begin next year, Borisov was quoted as saying.

Syria's Mediterranean coastal region has remained under firm government control throughout the war.

"Russia intends to organise the work of the old port and to build a new commercial port. The sum of investment for the next four years is valued at $500 million," Borisov was quoted as saying.

Moscow will also begin delivering 100,000 tonnes of grain in humanitarian aid to Syria by the end of December - supplies that will continue until the second quarter, he said.

Ports in Crimea, which Russia annexed from Ukraine in 2014, have exported the Black Sea peninsula's surplus of grain to the port of Tartus in recent years to ensure Assad's Syria has a reliable source of food.

The Russian Navy also operates a military facility at Tartus, Russia's only naval foothold in the Mediterranean, and Moscow has previously said it plans to expand and modernise the port's facilities for its fleet.

Russia also has an air base in Syria's coastal Latakia province which it has used for air strikes against forces opposed to Assad. Last month, Moscow said it had set up a helicopter base at an airport in northeastern Syria.