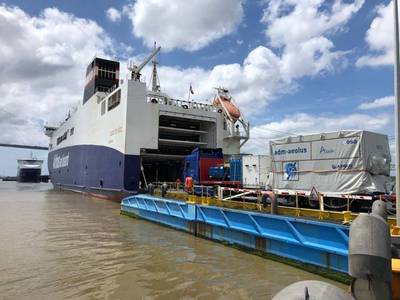 On June 15, 2018 at the Montoir de Bretagne roro terminal, an AEOLUS satellite designed by Airbus Space and Defense for the European Space Agency was loaded aboard the ro-ro vessel Ciudad de Cadiz, bound for Kourou, in French Guiana.

Managed by the Louis Dreyfus Armateurs Group and chartered to the Airbus Group, the Ciudad de Cadiz usually transports aircraft sections and components, so the loading of the satellite expands its range of industrial cargo. This is the first time that an aerospace industry product will have transited the Port of Nantes − Saint Nazaire, and the first time that Airbus Group is transporting one of its satellites aboard one of its own vessels.

In order to not risk damaging the satellite’s extremely sensitive measuring instrument by a sudden loss of pressure, Airbus chose to use a ship for the Atlantic crossing instead of transportation by air. Airbus is making use of its maritime logistics organization, which is entrusted to its service provider LD Seaplane, a subsidiary of shipping group Louis Dreyfus Armateurs.

Conveyed from Toulouse, where it had been undergoing a last series of inspections at the InterSpace test centre, the AEOLUS satellite arrived this Friday at Nantes − Saint Nazaire Port’s ro-ro terminal at Montoir de Bretagne. On that same day, it was loaded on board the vessel along with its component parts, which were packed into 6 containers.

The 1.33-metric-ton satellite is equipped with the very first LIDAR (LIght Detection And Ranging) space instrument named "Aladdin", which uses the Doppler effect to measure wind speed at different altitudes. AEOLUS is the first satellite that is capable of observing wind profiles on a global scale, and it will make 15 daily rotations around the Earth. The collected data will provide reliable information about wind profiles, information which is required by meteorologists in order to improve the accuracy of their forecasts, and which will enable climatologists to better understand the general dynamics of the Earth’s atmosphere.

The Ciudad de Cadiz is expected to arrive in French Guiana on June 28, 2018. AEOLUS will be propelled by the Vega launcher and put into orbit on August 21, 2018.