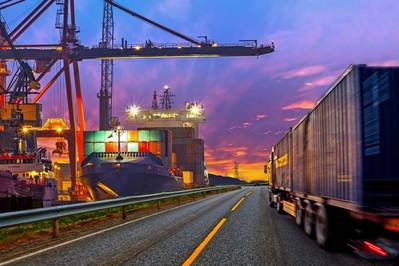 Imports at the nation’s major retail container ports are expected to continue at near-record levels this month and the remainder of the year despite a new round of tariffs on goods from China, according to the monthly Global Port Tracker report released today by the National Retail Federation and Hackett Associates.

“Even with virtually everything American imports from China soon to be subject to tariffs, it isn’t quick or easy for retailers to change their supply chains,” NRF Vice President for Supply Chain and Customs Policy Jonathan Gold said. “That means American families are ultimately going to pay more for goods they can’t do without. And even if sourcing eventually shifts away from China, it will simply come from other countries. It’s time to stop punishing American businesses, workers and families for China’s wrongdoing.”

President Trump announced last week that new 10 percent tariffs on an additional $300 billon in Chinese goods will take effect on September 1. Coupled with 25 percent tariffs imposed on $250 billion worth of imports over the past year, the new round will tax almost all goods the United States imports from China. Meanwhile, America’s tariff bill continues to grow. According to data released this week by the Tariffs Hurt the Heartland coalition, American importers paid $6 billion in tariffs in June, one of the highest-tariffed months in U.S. history and up 74 percent from the same month last year.

“The uncertainties of the administration’s tariff policies continue to vex the markets,” Hackett Associates Founder Ben Hackett said. “Our overall outlook is more pessimistic than last month, underlining that trade wars are not harbingers of good things to come.”

Hackett said the 10 percent tariffs would not likely have an immediate impact on import volumes but an increase to 25 percent – as happened earlier this year with the most recent previous round of tariffs – “would have a significant impact and would cause us to lower our trade projections further.”

U.S. ports covered by Global Port Tracker handled 1.8 million Twenty-Foot Equivalent Units in June, the latest month for which after-the-fact numbers are available. That was down 2.9 percent from May and down 3 percent year-over-year. A TEU is one 20-foot-long cargo container or its equivalent.

The August and October numbers would be the highest monthly volumes since 1.96 million TEU last December, tying for the third-highest month on record behind that and the all-time record of 2 billion TEU set last October. While imports will decline year-over-year most months during the remainder of this year, that is largely because of high volumes seen last year as retailers rushed to bring in merchandise ahead of scheduled tariff increases.

Global Port Tracker, which is produced for NRF by the consulting firm Hackett Associates, covers the U.S. ports of Los Angeles/Long Beach, Oakland, Seattle and Tacoma on the West Coast; New York/New Jersey, Port of Virginia, Charleston, Savannah, Port Everglades, Miami and Jacksonville on the East Coast, and Houston on the Gulf Coast.