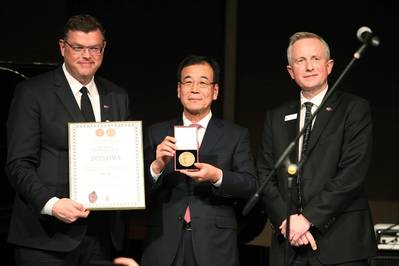 The award was presented to Lee (center) by the Danish Minister for Trade and Development, Mogens Jensen (left), and CEO of the Danish Export Association, Ulrik Dahl (right).

The recipient of the Danish Export Association’s Diploma, and His Royal Highness Prince Henrik’s Medal of Honor is J.W. Lee, a successful Korean businessman who, over many years, has built a successful agency business based around the products of VIKING Lifesaving Equipment, the Esbjerg-based global company in marine and fire safety equipment.

The award was presented by the Danish Minister for Trade and Development, Mogens Jensen,and CEO of the Danish Export Association, Ulrik Dahl, at a gala dinner held as part of the current Danish trade delegation to the Republic of Korea. Dinner attendees included numerous representatives from the Korean shipbuilding industry, Korean government officials, Danish industry, the Danish embassy in Korea, as well as a delegation from VIKING, including CEO Henrik Uhd Christensen.

J.W. Lee is the founder and president of DaeMyung Marine Co. Ltd. which is based in the city of Pusan in Korea. After signing up with VIKING as a sales agent in 1986, Lee began to build a business upon VIKING’s marine safety equipment with the Korean shipyards. From modest beginnings, the company has now achieved annual sales in hundreds of millions of Euro, and has captured the lion’s share of the Korean newbuilding market for VIKING’s core products and solutions.

“Mr. Lee has done an outstanding job,” explained Henrik Uhd Christensen. “He has built a very strong position for Danish maritime products in Korea, entering into multi-year framework agreements with major shipyards in the region.”

In 1995, after becoming convinced that liferaft safety servicing should be expanded in Korea, Lee expanded DaeMyung Marine Co. Ltd.’s business to encompass service as well as sales. Over the years, he has also expanded the company’s product range to provide more of VIKING’s equipment, including state-of-the-art offshore evacuation systems.

Together with the Danish Marine Group, Danish Offshore Energy Group and other industry groups, Danish Export Association determined the south-western region of Korea as the destination for its March 2014 trade delegation because of the concentration of marine and offshore industry in Pusan and its surroundings. Korea is the world’s largest producer of complex offshore and maritime structures, comprising shipbuilding and offshore structures such as drilling rigs, drill ships, production platforms and FPSOs. Among other activities, the group visited the main shipbuilding and offshore construction companies in the area, meeting with design, procurement and technical departments.

The association’s trade delegations have long been a resounding success – in 2012 alone, for example, 610 companies joined trips to a variety of export destinations around the world.

Accepting the award and medal from Mogens Jensen, Lee thanked VIKING’s CEO for his company’s trust and support. “It is an honor to have my work recognized by Denmark, a country for which I have strong affection – and I will treasure this award as evidence of what people who inspire and trust each other can create together by leveraging the strengths of different cultures.”

The Diploma and Medal are awarded in recognition of an outstanding effort in promoting and marketing Danish products and services abroad, and can be given to persons and companies domiciled abroad, including subsidiaries of Danish companies.  Any exporter of Danish products or services can nominate their agents and partners abroad as possible recipients of the award. The decision on awarding the Diploma and Medal is made by a committee chaired by HRH Prince Henrik, four representatives appointed by the Executive Committee of the Danish Export Association, and a representative of the Ministry of Foreign Affairs.