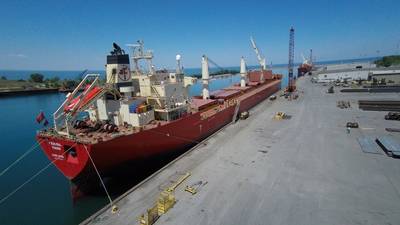 The Ports of Indiana handled 11.8 million tons in 2017, resulting in a 5 percent increase from 2016 and the second-highest annual shipment total in the organization's 57-year history. This was the fourth-consecutive year that the Ports of Indiana handled over 10 million tons of cargo, the only four years this has been accomplished. The ports' average annual shipments in 2014-2017 totaled over 45 million tons, exceeding the previous four-year average by nearly 50 percent.

Major cargo increases for the Ports of Indiana in 2017 included coal (+9 percent), steel (+14 percent), fertilizer (+14 percent), ethanol (+14 percent), limestone (+26 percent) and minerals (+28 percent). Shipments of heavy lift and project cargoes, such as wind turbines, laboratory equipment and mega storage tanks, had a 27 percent increase.
"Ports of Indiana experienced a historic year and we look forward to extending our growth spurt in 2018," said Ports of Indiana CEO, Rich Cooper. "The arrival of world-class companies like Metro Ports and POSCO Steel in 2017, combined with unprecedented shipping levels at Mount Vernon and the development of major expansions at Jeffersonville and Burns Harbor, have the Ports of Indiana well positioned to help drive long-term future growth of Indiana businesses and our state economy."
On Lake Michigan, the Port of Indiana-Burns Harbor handled 2.8 million tons in 2017 completing the highest three-year total in the port's history. Steel shipments were up 38 percent and large-dimensional cargoes increased nearly 27 percent, including the most valuable shipment ever to pass through Indiana's ports - ICARUS - the world's largest liquid argon particle hunter which was handled in July 2017. The instrument was shipped through the port in two semi-truck sized containers from Switzerland to the U.S. Department of Energy's Fermi National Accelerator Laboratory (Fermilab) in Batavia, Ill. Also in July, the country's oldest stevedoring company - Metro Ports - became the new bulk terminal operator and immediately doubled the size of the port's bulk terminal.
On the Ohio River, the Port of Indiana-Mount Vernon handled 6.8 million tons in 2017, which is 7 percent higher than the previous year and over 200,000 tons more than the port's previous record set in 2015. Key drivers of the record shipments included increases in coal (+9 percent), ethanol (+24 percent), fertilizer (+41 percent) and minerals (+28 percent). The port shipped just under 20 million tons over the past three years, which is a 60 percent increase of the previous three years. The port also handled more cargo in December than any other month in port history, exceeding the previous high set in October 2016.
The Port of Indiana-Jeffersonville handled 2.2 million tons in consecutive years and completed a four-year average that is 60 percent higher than the previous four years. Fertilizer, grain and steel were the largest volume cargoes, making up about 90 percent of the port's barge shipments moving up and down the Ohio River. In September 2017, POSCO, the fifth largest steel producer in the world, opened its new plant at the port. POSCO is a multinational company that ranks among Fortune's top 250 companies and was recently named the 'World's Most Competitive Steelmaker' for the eighth consecutive year by the globally-renowned steel information service provider, World Steel Dynamics.
Major port expansions are also being planned at the Jeffersonville and Burns Harbor facilities, supported by the U.S. Department of Transportation's TIGER and FASTLANE grant programs. In 2017, Burns Harbor earned one of only 10 small project grants in the country awarded through the FASTLANE program. The approximately $20 million expansion will be developed over the next few years and include the construction of two rail yards, a new shipping berth, a truck marshalling yard, 1,200 foot expansion of a cargo dock and a new cargo terminal with multimodal connections for handling cargo transfers between ships, barges, rail cars, and trucks. Planning for a $17 million expansion at Jeffersonville was conducted in 2017 and construction will start in 2018 on the first phases of the project which will eventually include major rail extensions, a unit train rail siding, a bulk terminal and a new transmodal facility.
"Investing in our infrastructure is critical to the ports' ongoing growth," said Ports of Indiana Vice President Jody Peacock. "Developing new cargo terminals, unit train capabilities and intermodal facilities are required to maintain a modern port system that provides our customers with access to global markets and a sustainable competitive advantage. All three of our ports also became 'fiber ready' in 2017, and we're continuing to look for ways our ports can add value for existing businesses and attract new multimodal companies to Indiana."
The Ports of Indiana is also exploring the opportunity to expand its three-port system by adding a new port in southeast Indiana, inside the Cincinnati metropolitan area. In 2017, the Ports of Indiana entered into an agreement to purchase up to 725 acres of land along the Ohio River in Lawrenceburg and Aurora, Ind., as the potential home of a fourth state port. More than 80 percent of the original land purchase to build Indiana's ports has been developed and the state has not opened a port since 1985.
• Aurora • Burns Harbor • Illinois