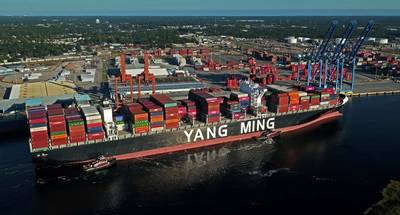 The Yang Ming Warranty sailed into the Port of Wilmington on Monday with a carrying capacity of 14,220 TEUs (twenty-foot equivalent unit), setting a new record for the North Carolina State Ports Authority.

“North Carolina Ports continues to prove it is an attractive global gateway for shippers. The arrival of the Yang Ming Warranty further solidifies our position as a big ship ready port. We are capable of working the largest container vessels calling on the East Coast,” said Brian E. Clark, Chief Operating Officer, North Carolina Ports. “As our capabilities continue to expand so will our abilities to better serve existing and future customers.”

“This latest achievement would not have been possible without the support of our many partners at the local, state and federal levels as well as funding from the North Carolina General Assembly,” Clark said. “It is also proof our infrastructure improvements are paying off and our customers are taking notice.”

The YM Warranty is operated by Yang Ming Marine Transport Corporation in partnership with THE Alliance linking Asia and South America to Wilmington. THE Alliance is made up of three additional ocean carriers: Hapag-Lloyd, HMM and Ocean Network Express (ONE).